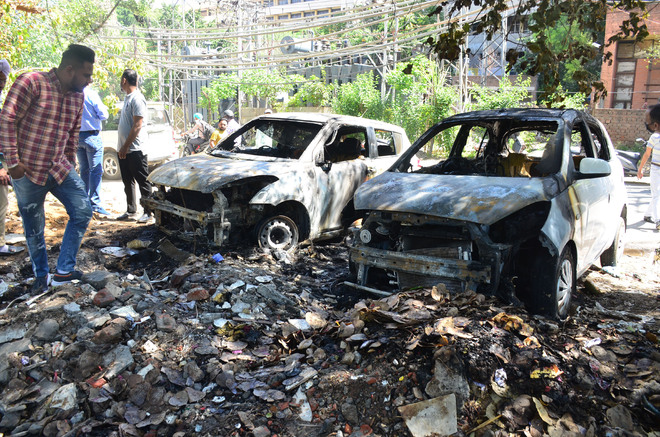 The remains of the cars at the Feroze Gandhi market in Ludhiana on Wednesday. Photo: Ashwani Dhiman

Panic spread in the Feroze Gandhi market after four cars caught fire on Wednesday morning. Alert people saved two cars as they broke window glasses and dragged the vehicles away. While two cars — a Swift and Santro — got gutted in the fire.

The reported cause of fire was a garbage dump which was set on fire by someone. The vehicles caught fire through sparks under them.

As per the eyewitnesses, the fire broke out around 10.30 am. Four cars were parked there and initially two (Swift and Santro) caught fire. While sparks had also reached under the two other cars parked there but people standing there broke the driver-side glasses of the cars and steered them away to safety.

People also tried to douse flames of the two cars by putting water over.

Investigation officer Sub-Inspector Kulwinder Singh, in-charge Kochar Market police post, said someone had set the garbage on fire and it led to the accident.

He said it was not sure who put the garbage on fire and investigation was on in this regard.

Both the car owners demanded that since the garbage was put on fire by staff of the Municipal Corporation, Ludhiana, so the MC should give them compensation.