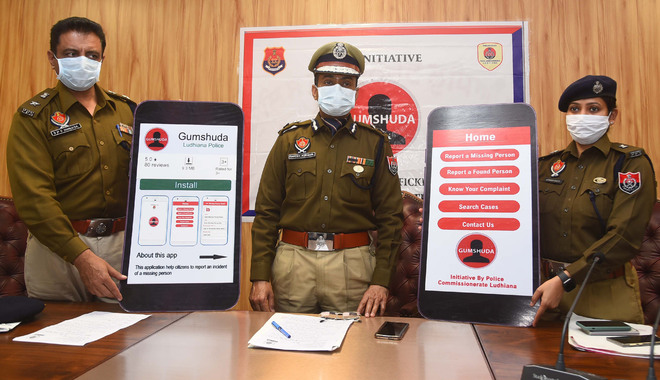 The Ludhiana Commissionerate today launched “Ghumshuda” app by putting to use technology to match missing persons with the recovered persons.

The app can be operated by any person by downloading it and the report about a missing person can be filed by just a click on a mobile.

Agrawal said in this app, the police had updated the records of more than 10 years of missing persons of all police stations of Ludhiana and so far, more than 3,000 missing persons’ details had been uploaded in the app.

He said Ludhiana, being of metropolitan dimensions, a lot of people are reported missing here. To streamline the process of matching the missing persons, with recovered persons, the app has been developed. The app also has a feature to enter details of the traced persons kept in orphanage homes.

The public can make use of the search feature by putting various filters according to age, sex, date of missing etc.

By using facial recognition, the app will connect to databases of missing children to find a potential match.

“We will update all data of missing persons and kidnapped persons after receiving a complaint at the police station level. A special control room to operate this app and to deal with the missing persons has been set up for this purpose,” said Agrawal.

With this app, all police stations of the city police will be connected and if any missing person is found, the SHO of the thana concerned can upload the photo of the missing person. The app server has the photo search feature, which can match the found person’s details with missing person’s data in the app at just one click.

The CP said the app was presently limited to the Ludhiana police and if it turned out to be successful, its usage could be made available to all other police districts by uploading the data of all missing persons of the state.

The Commissioner of Police said his team worked hard for three months to complete the app.

Can have data of unknown bodies

ADCP (Crime) Rupinder Bhatti said in this app, photos of unidentified bodies would also be uploaded. This would help the police across the state or country to identify bodies, as sometimes a missing person report is lodged at one police station and the body of such person can be recovered by another police station.