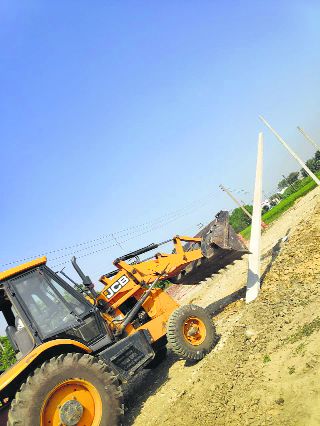 A team of officials and field staff from the regulatory branch of the Greater Ludhiana Area Development Authority (GLADA) today carried out a demolition drive in three colonies at Alamgir village on the periphery of the city.

Officials, including Sub-divisional Engineer Sandeep Sharma, Parminder Singh and JP Singh, along with Junior Engineers Akshay, Amarjit and Aman, arrived at the illegal colonies where internal development works were being carried out. With the help of men and machines, the demolition squad razed structures, dug up roads, streets and sewer lines, uprooted electric poles and demolished boundary walls in the colonies.

A piece of advice

Senior GLADA officials said the drive against illegal and unlicensed colonies would continue and they had advised people to stay away from investing their hard-earned money in such illegal colonies.

The developers of these unlicensed colonies were sternly told to desist from carrying out any further development work in the colonies and it was made clear to them that in case of non-compliance they would have to face criminal proceedings under the PUDA Act.

Senior GLADA officials said the drive against illegal and unlicensed colonies would continue and they had advised the people to stay away from investing their hard-earned money in such illegal colonies.