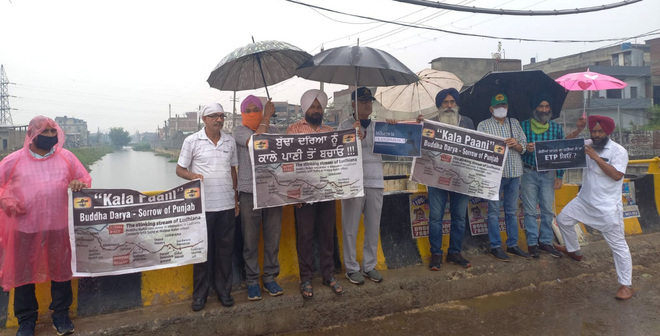 Members of the Public Action Committee (PAC) for Sutlej and Mattewara Forest staged a protest at the Buddha Nullah bridge near Dairy Complex on Tajpur Road here, blaming the governments for not taking the issue of pollution seriously.

The protesters alleged that the governments are non-serious on the issue of pollution and degrading quality of river waters as the Sutlej and Buddha Darya are a proof of that. They raised questions as to why the waste from dairies is still being dumped into the Buddha Nullah.

A member of the PAC, Col (retd) CM Lakhanpal, said it was the third protest under the “Freedom from Pollution” series. “Dairies contribute a lot to the pollution load of the Buddha Nullah. The NGT had ordered the CPCB to frame guidelines for dairies which the CPCB had published in July 2020. As per those, no dairy is allowed within any city limits. Secondly dairy farms cannot be located in flood-prone areas. Thirdly they cannot be within 500 metres of a river. Ludhiana dairy complexes of Tajpur and Haibowal violate all of these guidelines and therefore it is no longer legally tenable to keep them within the city limits. Therefore the government has no choice but to shift them out of the city,” he said. Jaskirat Singh of the Naroa Punjab Manch said, “Senior officers, who have worked on the Buddha Darya problem for years, have clearly said in the meetings of the Buddha Darya Task Force that the problem of the Buddha Darya cannot be solved without shifting dairies out of the city and Effluent Treatment Plants are not going to be enough to solve it.”

Dr Amandeep Bains of the RBS Roots said, “On the one hand the Rs 650-crore Buddha Darya rejuvenation project that concerns health of millions is not having a single eminent environment scientist or a health scientist on the team despite the fact that the project concerns drinking water pollution of millions, on the other hand, the govt is not even answering questions that citizens and civil society have been asking. This shows that the government neither has sincerity to solve the problem nor any answers to such questions that are being asked.”