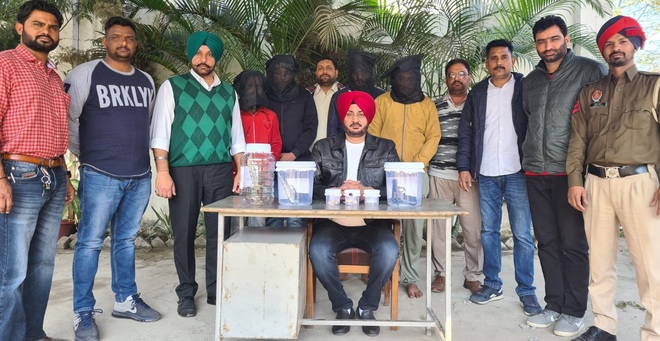 The suspects in the custody of the Ludhiana police. Tribune photo

With the arrest of four persons, including a food delivery boy, the Commissionerate Police have cracked the robbery committed at Satguru Jewellers, Hambran road, on October 19 this year.

Manjinder was working as a food delivery executive. One of the accomplice, Makhan Singh, of Burj Pawat village was absconding in the case.

Commissioner of Police (CP) Gurpreet Singh Bhullar said Manjinder was a key conspirator in the robbery as he used to keep an eye on Satguru Jewellers while delivering food orders in the locality.

The CP said Manjinder had come to know that only an elderly man used to sit in night hours at the shop and hatched the conspiracy with the other accused.

He said on October 19, Manjinder, along with Gurpreet and Makhan, reached the shop on a motorcycle (bearing registration no. PB10 DC 5612) around 9 pm and looted gold and silver ornaments and cash from the shop at gunpoint.

The CP added that on getting information about the crime, teams of the PAU police station and CIA Staff 1 were formed to nab the robbers. Earlier, the police rounded up three accused involved in the crime following the investigation carried out in Hiran village, Chandigarh road, when they were moving to Ludhiana in a car (bearing fake registration number PB10 CE 6789).

The police also recovered a .32 bore pistol, six cartridges, a toy pistol, a sharp weapon, a car, a bike used in the crime, looted ornaments and other items, Bhullar said, adding that Ashish had supplied a weapon to them and was nabbed on November 20.

The CP said the accused would be produced in court and the police would seek their further custody to nab the absconding accused, Makhan.