Haphazard parking on highway poses threat to motorists at night : The Tribune India 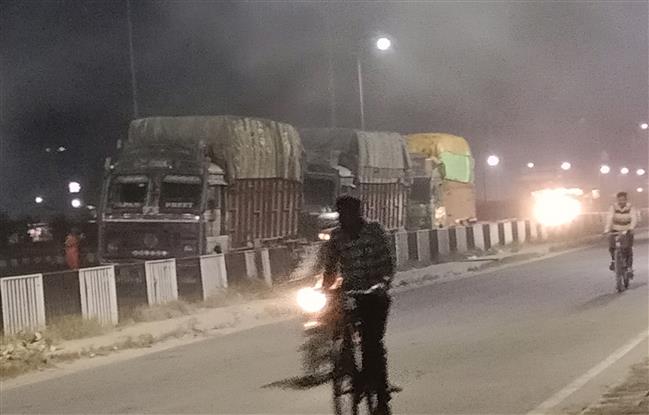 Trucks parked on the highway without any parking light on. Photo: Inderjeet Verma

Haphazard parking on the highway, especially at night, increase the chances of road mishaps. Though this offence is punishable and heavy penalty can be imposed on violators, the police fail to act against such vehicles.

Commercial vehicles such as trucks can be seen parked on the highway during the night hours. Sometimes these vehicles are parked without parking lights on.

Yesterday, some trucks were parked along the highway on the Jalandhar bypass without any parking lights on.

A few months ago, the Ludhiana police had started challaning such vehicles and even FIRs were also registered against the drivers or the owners of such vehicles, but the drive didn’t continue for long.

A roadside vendor on the Jalandhar bypass on the Ludhiana-Jalandhar highway said truck drivers resort to wrong parking on the highway. Foggy days were ahead and any negligence might lead to a major road mishap.

“Such violations can be mostly seen near eating joints or dhabas on the highway, especially at night, where truck drivers stop to have dinner. The police should ask the patrolling team to keep a check on the vehicles parked wrongly on the highway,” said a city resident.