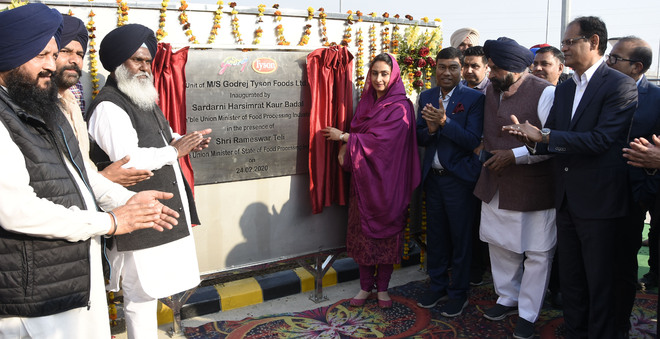 Ironically, the food park has not been inaugurated to date.

Harsimrat said Chief Minister Capt Amarinder Singh should not be presented with the ‘Ideal CM’ award, but ‘Idle CM’ award for allegedly doing nothing for the state and its residents in the past three years, including not allowing inauguration of Ladhowal Mega Food Park.

She alleged that Capt Amarinder was repeatedly scuttling her steps to dedicate major facilities to the residents of Punjab.

“Same thing happened in the case of the AIIMS, Bathinda. It is being witnessed again in case of the Rs 117 core food park for which the Ministry of Food Processing has given a sum of Rs 50 crore.”

Harsimrat said the park was approved in November 2015 and was slated to be completed in May 2018, but has been deliberately delayed.

She said there was complete lack of initiative from the Punjab Agro Industries Corporation Limited (PAIC) to stick to the mandated schedules.

Harsimrat said these two food parks will benefit people of Ludhiana and nearby districts, including Jalandhar, Moga, Amritsar and Fatehgarh Sahib.

She said once all 42 mega food parks get operational, 50,000 people would get employment.

“These are the actual figures. Not the figures claimed (11 lakh jobs) by Capt Amarinder Singh in Delhi recently.”