Encourage use of public transport over private vehicles 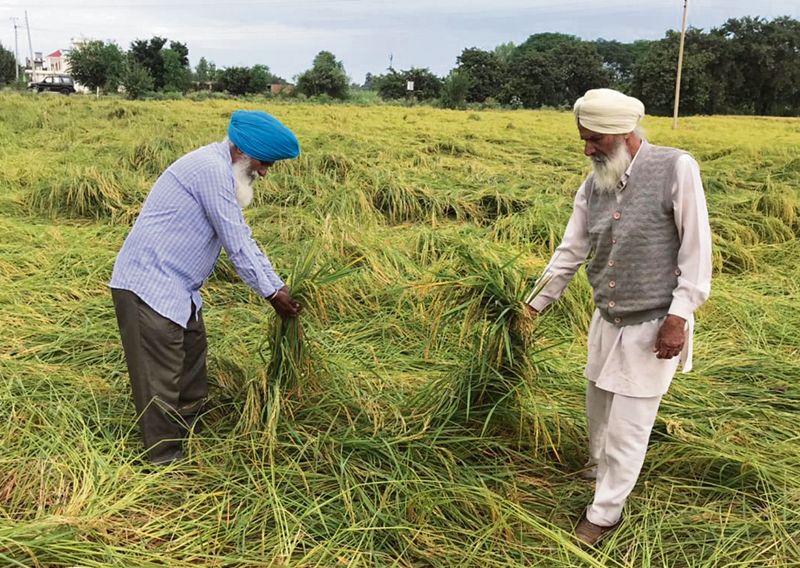 Paddy damaged in a field at a village near Dehlon. Tribune photo

Reckless drivers in city have the right of the way. Overtaking from any direction and halting without giving signal seems to be their driving code. While most people inch their way through peak traffic hours, reckless drivers try to zip through rush while scraping any vehicle within distance. Though the traffic police do penalise reckless drivers, certain measures still need to be introduced to stop them from breaking rules. The traffic police should strictly implement rules without prejudice to ensure safety of commuters on roads. A unified traffic management system comprising proper infrastructure, safety compliance by drivers, curtailing the number of vehicles and widening roads is the need of the hour.

Ludhiana faces the problem of severe traffic congestion. Valuable time of commuters is wasted in frequent traffic jams. The problem aggravates during festival season. The administration should not allow wrong parking in the city. People violating traffic rules should be dealt with strictly. Residents should cooperate with the traffic police by following rules and avoid parking vehicles on roads.

Volunteers can help in managing traffic

Ludhiana is known for its traffic, which is difficult to manage during the festival season. The police are making efforts to solve traffic congestion in the city, but moral responsibility lies on us too. Shopkeepers should make arrangements for the parking of vehicles of their customers. Don’t take vehicle to a market, which witnesses huge rush. Volunteers should also come forward to control the traffic in the city. The administration should designate parking space in all markets so that commuters can do shopping without any hassle. The MC should remove encroachments in the city. Rehriwalas should be allotted space to carry on their businesses.

Metro can decongest roads in city

The traffic congestion in Ludhiana is getting worse with each passing day. We cannot blame the authorities concerned for insufficient roads. Rather commuters are to be blamed, who take their vehicles to places hardly at walking distance from their residences. There has been a steep rise in the number of vehicles in the city. Every rich and middle class family has at least one or more cars. There is too pressure of vehicles on city roads. How can we expect fast growth of infrastructure in the city? But, we have to find a concrete solution to this problem. The commuters should opt for carpooling, walk to offices and use public transport instead of private vehicles. The administration should arrange more means of public transport for commuters. Also, the administration can increase parking rates to discourage people from using their own private vehicles. A Metro can decongest city roads.

Pay for parking at workplace

The problem of traffic congestion aggravates during the festival season. It can be reduced to some extent by commuters, who drive their vehicles. The authorities concerned are doing their bit through various means to reduce traffic snarls in the city. Optimising traffic lights management, using CCTVs to monitor road conditions and vehicles, enforcing traffic laws strictly, improving public transport, reducing travel ticket price, increasing car parking fee, promoting car pooling, charging for parking at work place, removing encroachments and issuing challans for traffic rule violations will certainly reduce traffic chaos in the ongoing festival season. This is possible only with cooperation of the general public.

Congestion due to ongoing projects

Traffic chaos is more during morning and evening hours. During night, heavy vehicles create traffic snarls. Besides, traffic congestion has increased due to the ongoing construction activity of many development projects under the Ludhiana Smart City. The Municipal Corporation and the police should prepare a traffic management plan for the city. The MC should clear encroachments to reduce traffic congestion. CCTVs installed in the city should be in working condition to keep a check on traffic rule violations. PCR personnel should be deployed at points witnessing frequent traffic congestion. Commuters should be made awareness of traffic rules through rallies and seminars. Traffic signals should be installed at roundabouts at busy chowks.

The administration should use CCTV cameras to monitor vehicles on roads in the city. People should religiously follow traffic rules. Carpooling can reduce the number of vehicles on city roads. Automatic number plate recognition (ANPR) system can help in traffic management and improve commuters’ safety. Traffic signals should be installed in the areas witnessing traffic congestion.

The special drive launched to reduce traffic congestion in city should be implemented in true letter and spirit. If anyone flouts traffic rules, he/she must be taken to task and punished. The police must ensure that there are no traffic jams in main markets, including malls, and important crossings at the city entry points. The police should make sure that people follow traffic rules while commuting on city roads.

No parking means no parking. It should be implemented strictly in the city. Traffic police should do their duty honestly. They should tow away vehicles from no parking areas. There should be check on speed of vehicles. Cops should keep a watch on roads witnessing less traffic as people indulge in speeding vehicles on these stretches thus increasing chances of accidents. Wrong side driving should not go unpunished.

Multi-pronged strategy is needed for traffic management during the festive season in Ludhiana. All encroachments should be removed from roads and markets. The Municipal Corporation should construct multi-storey parking lots in the market areas. The police patrolling should be enhanced to reduce traffic snarls. The traffic police should challan speeding vehicles every day. The public should be made aware about benefits of following traffic rules. The administration should promote use of public transport. Residents should be discouraged from using private vehicles.

Innovative steps can reduce traffic congestion in the city. Movable barriers can be placed on roads to change vehicle lanes on requirement basis. Smart signal technology can be used to adjust time for the green light as per the flow of traffic. Advanced traffic advisory should be provided to commuters so that they can avoid congested roads. Carpooling is a good option to reduce number of vehicles on roads. Residents should use public transport.

Ludhiana desperately needs more parking spaces. In the absence of the public transport system everyone uses personal vehicles to commute, which leads to traffic congestion. The city also needs an intelligent traffic management system. Traffic signals should be synchronised to reduce traffic bottlenecks and streamline flow of vehicles. The police should not allow encroachments on roads during the festival season. Those blatantly violating traffic rules should be dealt with strictly.

lanes for specific type of vehicles

The condition roads is dismal in Ludhiana. There are so many jams, which commuters face in the city due to faculty network of roads. Some underpasses and flyovers have been constructed in the city to lessen traffic congestions. Each lane should be earmarked for particular type of vehicles to smoothen the flow of traffic. A central control room should be established to monitor and sort out traffic problems in different areas of the city.

Promote use of bicycles

To solve the problem of traffic congestion, Smart City Ludhiana needs more parking areas across major markets and improve cycling infrastructure to promote use of bicycles instead of motorised vehicles. Use of public transport should be encouraged as it significantly reduces density of private vehicles on roads in the city.

Residents are struggling to cope with frequent traffic snarls and lack of parking space in the city. Ludhiana being a hub of hosiery is a densely populated district. People from all parts of the country come to the city for employment. This has led to increase in number of vehicles in the city and traffic congestion roads. The authorities concerned should take help of the police to manage traffic in the city. But that does not happen many times.

Most people use their private vehicles to commute on same routes. This increases traffic congestion on roads in the city. If going to the same area people must carpool to reduce traffic congestion and save money. This will also save fuel and time of commuters.

With dreaded dengue fever continuing to spread its tentacles fast and wide, Ludhiana has fallen under the high burden districts in the state. The rising number of daily cases has hard pressed the health infrastructure, which has started falling short for the needy. Are we heading to another health emergency similar to Covid? Has the Health Department once again been found wanting?

How can we tackle the current situation?