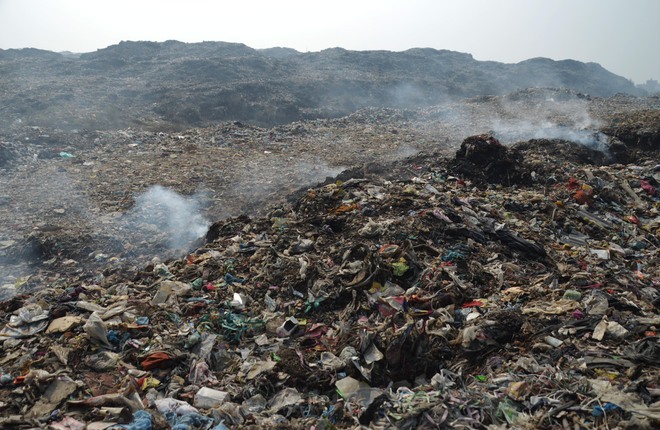 Heaps of garbage being set on fire at the MC’s main garbage dump in Ludhiana. Pic: Inderjeet Verma

With the passage of years, huge waste heaps that look like hills, are seemingly increasing at the MC’s main garbage dump near Kakka village, Tajpur Road, Ludhiana, as the civic body has failed to take concrete steps to deal with this waste so far.

In the absence of proper waste processing, the strong stench emanating from these big heaps has made nearby residents’ life miserable. The harmful smoke that emanates due to the burning of waste has increased their woes.

A senior official of the MC claimed that the old waste catches fire itself due to chemical reactions. Questions are being raised as to why the civic body authorities ignored the massive collection of waste for years.

The city produces waste of more than 1,100 MT every day. After door-to-door collection, the garbage collectors unload the waste at secondary garbage collection points at different locations in the city from where the waste is shifted to the main garbage dump.

After A2Z group, which had signed agreement with the MC in 2011 for 25 years, left the services on February 4, 2021, the waste processing plant at the main garbage dump site is lying closed completely. Thus, big amount of unprocessed fresh waste is also getting collected there.

The new and old trash at this dump (also known as landfill site on Tajpur Road) have been creating a big nuisance for the residents in a number of areas inside as well as outside the MC’s jurisdiction for a long time. The residents of Kakka village, Baba Naam Dev Colony, Mahatama Enclave, Tibba Road and other areas located near the dump want the government to provide them relief from this mess.

Ex-sarpanch of Kakka, Sukhdeep Singh, said, “Villagers had opposed the setting up of the dump there in the past, but their voice was ignored. When waste catches fire, it causes air pollution due to which people face respiratory problems. The government should take necessary steps to provide relief by resolving the issue.”

In February last year, a monitoring committee of the NGT had given instructions to the MC to ensure the implementation of the solid waste management rules and start process for remediation of legacy waste (old waste) site on Tajpur Road, Ludhiana. However, the MC is yet to take steps to deal with the legacy waste.

It is learnt that the civic body had to ensure the functioning of the waste processing plant by the end of the year 2012, but the project was delayed. Even after the wasteprocessing plant was made functional a few years ago, questions were raised over the working of the firm.

In September 2020, a senior official of the PPCB, Ludhiana, had stated that the waste was not being disposed of properly and it was earlier found that the waste processing plant was working at only 14 per cent of its capacity.

Notably, the MC had planned to set up two solid waste processing plants near Kakka village and Jainpur, but the work during the first phase was conducted near Kakka. Sources said the MC had not got permission to set up plant at Jainpur where residents had opposed the dumping site.

Mayor Balkar Singh Sandhu said, “We are going to float tenders for three main tasks door-to-door collection, lifting of garbage from secondary garbage collection points and for waste processing plant and to deal with legacy waste. The final decision would be taken soon.”

Senior environmental engineer of the PPCB, Sandeep Bahl, said, “After the termination of the A2Z firm services, the MC has assured to handle the solid waste management at its own level. In case any serious violation is found, the PPCB will take the required action.”