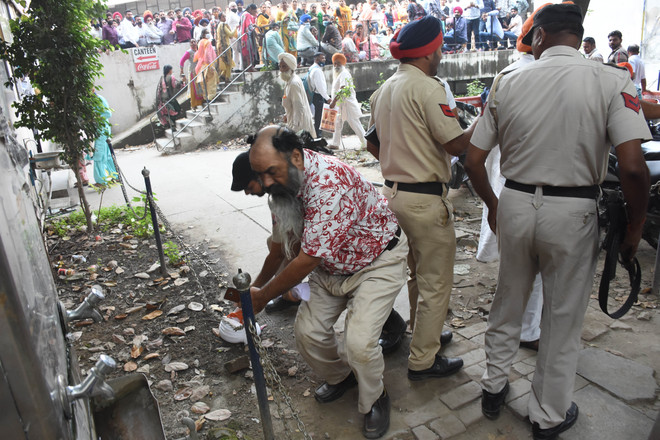 Gursimran Singh Mand tries to pick up his turban which fell on ground as he ran for cover after a face off with Nihangs, in Ludhiana.

A high drama today witnessed at the office of the Commissioner of Police (CP) where Gursimran Singh Mand, chairman, International Anti-Terrorist Khalistani Foundation, and Nihangs had a face-off.

Several Nihangs belonging to different organisations had come to meet the Commissioner of Police in connection with an FIR registered against Anil Arora, who allegedly posted some derogatory message against Guru Nanak Dev. Nihangs had been seeking the arrest of the person against whom an FIR under Section 295-A of the IPC was registered at the Police Division 3 here on Tuesday.

Mand had also come to meet the top cop regarding his property dispute.

Mand accompanied by several gunmen was standing near the CP office where Nihangs were also present. Eyewitnesses said Nihangs and Mand were staring at each other following which arguments started between them.

Both had challenged each other in the presence of police personnel. In no time, arguments took a ghastly turn and Nihangs ran towards Mand to teach him a lesson. Mand’s gunmen cornered him and took him towards the DCP office. While he was running for cover, his turban fell on the ground.

Tension had prevailed at the CP office after the incident. Police personnel and people present at the spot had to intervene to calm down both parties.

Mand said Nihangs had first challenged him while they alleged Mand had spoke Ill about them.

“We had come to meet the CP and we had not spoke anything to Mand but he deliberately challenged us,” they alleged.

Mand said he had sent a complaint to the CP and the DGP regarding the incident.