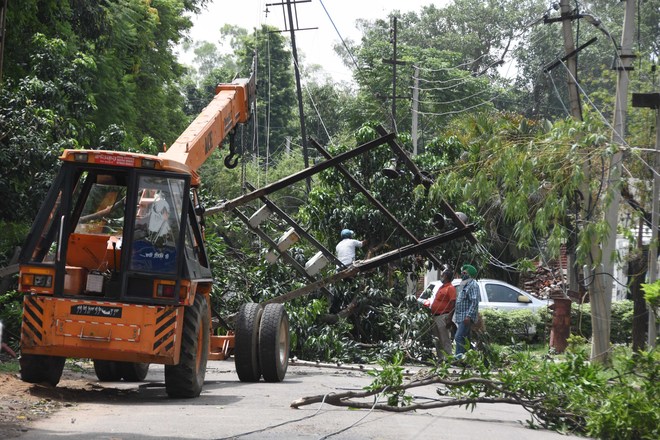 The thunderstorm that hit the city last night uprooted trees in at least 55 locations in the city, affecting traffic movement and power supply at many places.

Many trees fell on the electricity wires causing disruption in power supply and damaged several vehicles parked on roads.

As the high-velocity winds hit the city, a tree fell down outside MC Commissioner’s residence while one tree got damaged outside the DC’s residence. There are reports that trees got uprooted at Dr Lekhi Road, Mall Road, Tikona Park Model Gram, Dugri and various other locations in the city.

A tree had also fallen down near Dana Mandi on Gill Road due to which traffic got affected. Besides, a tree fell on cars at Jamalpur Chowk as per the information.

Some trees reportedly fell inside the houses and other places too. Manjit Singh, a resident of Tajpur Road, said: “We had a big 14-year-old jamun tree at our house but the storm uprooted it. It is a very sad moment for us that the tree has got damaged.”

Kirpal Singh, an official of the MC’s Horticulture Wing, said, “Our staff have been working since last night when high-velocity winds hit the city. We had started getting reports from different areas about the uprooted trees. Many of the sites were cleared by the morning. We had got information about uprooted trees at around 55 locations in the city.”

According to the information, a boundary wall of a vacant plot collapsed and debris fell on a car at Haibowal Khurd. A boundary wall also collapsed near the Civil Surgeon office in Ludhiana while a director board fell down on Chandigarh Road.