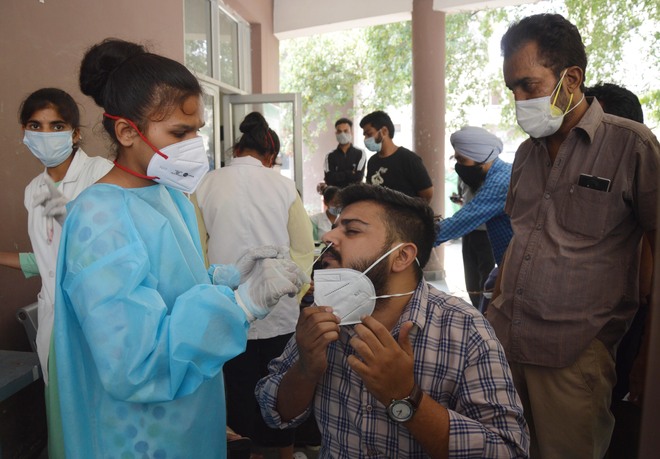 As many as 1,198 persons tested positive for Covid and the total positive cases from the district till now reached 58,788 today.

In the district today, 21 persons lost their lives to the virus, which is the highest single-day toll till now.

Those who tested positive included three healthcare workers, while 265 are still untraced.

As many as 41 patients — 38 belonging to Ludhiana and remaining to other districts — were admitted to the Level-III bed facility.

A total of 10,11,618 samples were taken, out of which reports of 10,11,193 samples have been received, As many as 9,44,041 samples were found negative, while reports of 425 samples are pending. No doctor to prescribe medical oxygen to patients in home isolation After it was observed that many doctors were prescribing oxygen to patients in home isolation, the state government today issued orders that henceforth no doctor would prescribe medical oxygen to patients in home isolation, since it was very important to monitor the condition of the patient who required oxygen support. On the other hand, the number of Covid cases is rising every day. Moderate and severe cases are getting admitted to the hospitals requiring oxygen support. The demand for medical oxygen has increased as the number of patients requiring oxygen support at L2 and L3 health facilities is increasing.

The industries/factories of the city returned 91 oxygen cylinders, including 17 filled ones, to the administration. All 17 filled cylinders were immediately put in Civil Hospital for treatment of ICU patients. Meanwhile, Nodal Officer Harpreet Singh Sekhon said any industry/factory could contact him on his mobile number (83901-00001) for cylinders.