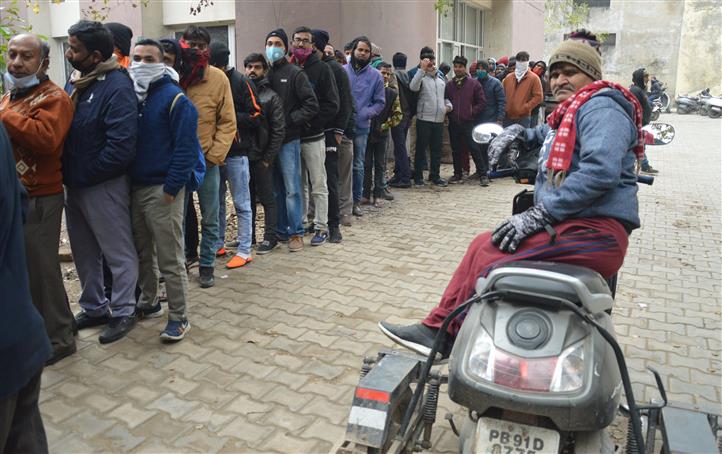 A long queue of people for vaccination in Ludhiana.

With the spike in Covid cases, the number of patients requiring hospitalisation is increasing with each passing day.

Today 247 patients were admitted to various hospitals across the district, out of which 151 patients belong to Ludhiana and the remaining 96 were from other districts.

Today there were 16 patients on the ventilator support, out of which 11 were from Ludhiana and five from other districts.

According to the health experts, most of the patients that are landing in hospitals are either without vaccination or those with comorbid conditions.

A medical specialist from a private hospital said those with comorbid conditions are required to be admitted to hospital so that their vitals can be checked regularly.

While those who had their vaccination are not getting too much affected by the virus this time during the third wave.

Gulkirat, whose mother is admitted to a hospital for Covid treatment, said it is the second time that her mother tested positive. “Since my mother is diabetic and hypertensive so we got her admitted to the hospital so that she is under expert care and any fluctuation in her vitals can be taken care of at an early stage,” she said.

Civil Surgeon, Dr SP Singh said they have been advising people to get themselves vaccinated and should not stop adopting precautionary measures like wearing mask and washing hands frequently. “Vaccination and masking up are the only two ways by which we can fight with Covid,” he said.