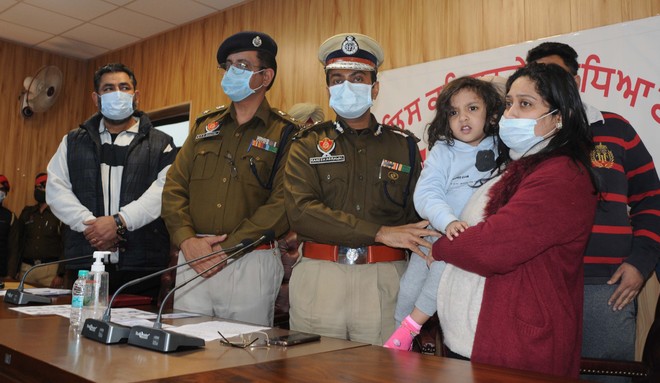 Police officials hand over the recovered child to his parents at the Police Lines in Ludhiana on Wednesday. Photo: Ashwani Dhiman

The kidnapping of a two-and-a-half-year-old child, Vinamr, son of a hotel owner Pankaj Gupta, had put the Ludhiana police on toes. Recovering the child safely was a challenge for the police as the kidnappers were making repeated threatening calls to the owner for a ransom of Rs 4 crore.

CP Rakesh Agrawal said the accused driver, Harinderpal, and his three aides had a notorious past. In 2010, the driver had also kidnapped a child from Arniwal village in Fazilka and later killed him. He is also facing other criminal cases registered in Punjab and Haryana. Accused Lal Singh is facing two cases, including a murder case, registered in Zira. Accused Sukhdev is already facing six cases.

Initially, the kidnappers had fixed the location to take the ransom money and the family had managed to collect Rs 50 lakh to give to the accused but at the last minute, they asked the family to wait for another location. Later, the kidnapper abandoned the child, fearing police action.

Kin were ready to give ransom

As per the Ludhiana CP, the child’s family had already started collecting the ransom money of Rs4 crore. Till late night, the family members had managed to collect Rs 50 lakh. They were also ready to pay the ransom money as they wanted their child to remain safe but the police operation mounted pressure over the kidnappers and the child was rescued safely.

Commissioner of Police (CP) Rakesh Agrawal told The Tribune that he immediately brought the entire matter to the notice of Punjab DGP Dinkar Gupta and started a search operation.

The DGP asked ADGP (law and order), Punjab, Ishwar Singh to carry out a special nakabandi throughout the state and all districts were put on a high alert while ADGP (internal security), Punjab, RN Dhoke personally supervised the entire operation.

“The boy was kidnapped at around 1.30 pm by driver Harinderpal Singh of Keys hotel owner on December 1 and at 2.30 pm, I got to know about the incident. I left all work and held an immediate meeting with my team officials and distributed them their tasks. I and the team members did not sleep for the whole night. At 8 am, the child was recovered from the Moga’s Dagru railway crossing as he was sitting in an abandoned Polo car and another accused, Rashpal, was nabbed from near the car. Swift car of the hotelier was recovered from the Kot Ise Khan area late in the evening,” Agrawal said.

The CP said when the kidnappers abandoned the child fearing the police, the accused had also informed the child’s mother over the phone this morning about the child’s presence in the vehicle.