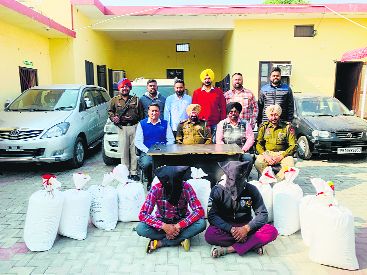 The accused in police custody in Jagraon. Tribune photo

The Ludhiana (Rural) police claimed to have busted a gang of drug peddlers which had been involved in distributing drugs and narcotics after smuggling the same from neighbouring states.

Drug money worth Rs 31,500, 220 kg of poppy husk and four vehicles used by the peddlers for crime were seized from two members of the gang who were arrested by a joint team of the CIA, Jagraon, led by inspector Prem Singh, during a naka at Canal Bridge, Gorsian Makhan, on Sunday evening.

The accused were identified as Baldev Singh, alias Bhulla, of Kote Muhammad Khan village in the Dharamkot area of Moga and his brother Sukhdev Singh Sebu. Both accused were travelling in different vehicles and reportedly going to deliver the contraband to their regular customers at villages of the region.

Senior Superintendent of Police, Ludhiana (Rural), Rajbachan Singh Sandhu said the police had received a tip-off that the accused had been running an illicit trade of selling drugs and narcotics among addicts of the region after procuring banned products from their regular suppliers. “Having received inputs about transportation of huge quantity of poppy husk in Mahindra Scorpio (bearing registration no. PB 02 BQ 8071) and Toyota Innova (PB 11 AL 5555), a team of police officials, led by CIA in-charge Prem Singh, was deployed. It succeeded in seizing 220 kg of contraband from two vehicles occupied by the accused,” said SSP Rajbachan Singh Sandhu. Two more cars (Maruti Alto) and drug money worth Rs 31,500 were also seized on the basis of information provided by the accused.

Though exact modus operandi of the accused and details about their other accomplice were yet to be ascertained, preliminary investigations revealed that they had brought the consignments from two notorious interstate drug peddlers of Moga district.