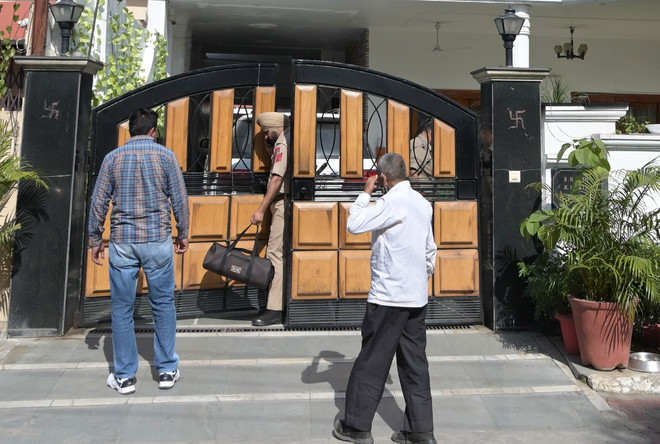 A policeman comes out of the house of a bicycle manufacturer during an income tax raid in Ludhiana. Photo: Ashwani Dhiman.

The raids by the investigation team of the Income Tax Department continued today till the filing of the report. According to well-placed sources, the surveys-cum-raids are expected to be continued tonight also.

“Today, the other premises, workshops, godowns, etc, were visited by the department teams and all the documents, datas, bills, etc, were collected by them. At this hour, the department is collecting minute details and nothing can be shared. It will take two-three days to divulge the details,” said an Income Tax official.

The raids started in the wee hours on October 22.

The raids have reportedly been conducted on Arpan Cycles, Neelam Cycles, Gurdeep Cycles, Vishal Cycles, Raka Cycles, etc. The Dhandari, Focal Point and Industrial Area units of these industries along with residences and workshops have been raided by the Income Tax sleuths.