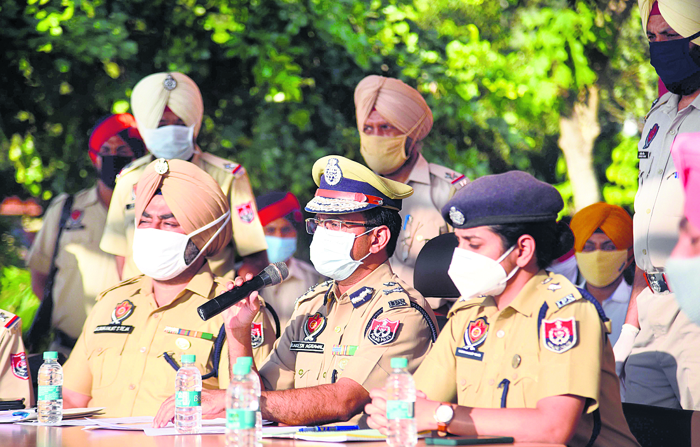 In one of the biggest crackdowns on illegally manufactured chains of pharmaceutical opioids, a Ludhiana team of the Punjab Police has recovered 99,600 bottles of intoxicant syrup (chlorpheniramine maleate and codiene phosphate syrup), 22,000 intoxicant tablets (spasmo proxyvon plus, tramadol and alprazolam).

Commiser of Police (CP) Ludhiana Rakesh Agrawal said the first recovery was made on September 17 when the Dehlon police nabbed Dhamanpreet Singh and Ranjit Singh Ludhiana along with 22,000 pills (tramadol and alprazolam), 50 bottles (chlorpheniramine maleate and codiene phosphate syrups) and a swift car.

During interrogation, they revealed that they purchased these drugs from Arjun Dev and Gulshan Kumar of Alwar, Rajasthan. The arrest warrants were got issued for both accused and they were arrested from Alwar district of Rajasthan on October 7.

During interrogation, they revealed that they used to buy intoxicants from one person named Prem Ratan of Jaipur. They also revealed that one lakh syrup bottles had been secretly hidden at the DPR Transport godown, Vegikal Choraha road, Jaipur, Rajasthan.

Based on their revelations Prem Rattan was arrested from Jaipur and was brought on seven-day police remand. On October 11, a team consisting of Punjab Police Ludhiana and FDA (Food and Drug Administration) Punjab raided the premises of the main accused Prem Rattan at Muralipura, Jaipur, after procuring a search warrant from the court and recovered 99,600 bottles of syrup welcyrex (chlorpheniramine maleate and codiene phosphate syrups). The worth of the recovered consignment is over Rs 4 crore in the open market, said the Police Commissioner.

The CP added that although the initial recovery in this case was very less, sustained investigations led to the unmasking of the backward and forward linkages of the unholy nexus and further revealed the involvement of various pharmaceutical manufacturing firms which were under investigation and further links are being followed up.

These companies were making prescription drugs and these drugs were extensively abused as pharma opioids by drug addicts all over the country.

The pharmaceutical manufacturing companies kept on supplying these consignments even to buyers without a valid licence. The payments and transfer of money was mostly done through multiple cash transactions into bank accounts of fake firms especially created for this purpose.

The police recovered 99,640 bottles of welcyrex codiene phosphate syrups, 9,000 tablets of alprazolam, 10,000 capsules of tramadol and 3,000 capsules of spasmo proxyvon plus.

The CP said Prem Rattan, the main accused, used to procure drugs from pharmaceutical manufacturing companies without having any legal licence. He used to generate fake invoices in the name of some medical stores, registered practitioners, but re-routed these drugs to smugglers at a higher price. The profit margin was high as they used to sell these at three times the MRP.