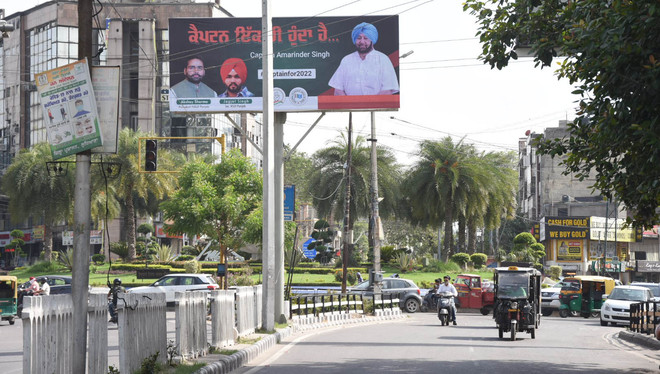 A direction signboard covered by a political hoarding in Ludhiana. Photo: Ashwani Dhiman

Commuters are forced to face a lot of inconveniences in navigating as political advertisements have shrouded direction signboards at various locations in the city.

In a clear violation of rules, Congress supporters have placed political hoardings and banners on the direction boards on Hambran Road, near Fountain Chowk, Link Road and other areas for free publicity causing inconvenience to the commuters. A picture of CM Captain Amarinder Singh has also been displayed on the unauthorised banners that have covered the direction boards.

It has been seen that direction boards are often misused by political leaders. These hoardings cover the direction signboards causing difficulty to commuters in navigation. The civic body should take strict action against the violators as per the law.

Notably, the illegal political advertisements were displayed on the direction boards many times in the past too but the Municipal Corporation (MC) took no concrete steps to stop such violations in the city. Such practices were also common during the tenure of the previous SAD-BJP government when a large number of illegal flexes were displayed on the direction boards.

Satinder Singh, a city resident, said, “Many people come from the outside and they face difficulties in navigating. It has been seen the direction boards are often misused by political leaders. The law should be equal for all. The MC should take strict action against the violators as per the law.”

Suresh Goyal, president, AAP Ludhiana, has criticised Congress leaders for displaying such banners on the direction boards in the city. He said the MC should remove the political banners/flex boards from the directions boards at the earliest and recover the financial losses from the violators.

As per the Punjab Municipal Outdoor Advertisement Policy, it is the responsibility of the MC officials to take action against illegal advertisements. MC Superintendent HS Dhalla could not be contacted for a comment.

Joint Commissioner Kulpreet Singh said that he will give order to officials concerned to conduct a survey and take action to remove if any banner is found on the direction boards.