Was being run from house; portable ultrasound machine, cash seized 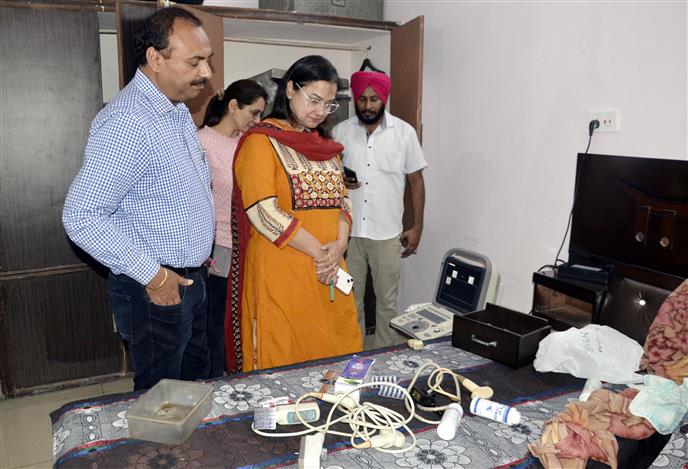 The district Health Department today conducted a raid at an unauthorised scan centre running from a house at Karnail Singh Nagar. An unregistered portable ultrasound machine and cash were seized during the raid. Two suspects were arrested.

Officials of the department had received a tip-off and they were keeping a vigil at the centre for the past few days.

According to information shared by District Family Welfare Officer Harpreet Singh, the centre was run by two persons, Karan Malri and his aide.

Earlier, Karan was working as a public relations officer at a nursing home and it seems he had some links there through which he was getting patients. The second person used to bring patients on the premises on a motorcycle for conducting illegal gender determination tests.

“A decoy patient was sent to the scan centre today and the deal was fixed at Rs 30,000. The serial numbers of the currency notes were noted. She was taken to the centre on a bike by the aide of Karan. We recovered Rs 20,000 (same notes) that was paid by the decoy patient while the rest of the amount was given to middlemen. Besides, Rs 12,500 in cash was also seized from them,” said Dr Harpreet.

The suspects had been arrested and an FIR has been registered. The ultrasound machine and the money had been handed over to the police.

Civil Surgeon Hitinder Kaur warned the scan centre owners that anyone indulging in illegal activities and violating the norms of the Health Department would not be spared. They would face strict action.