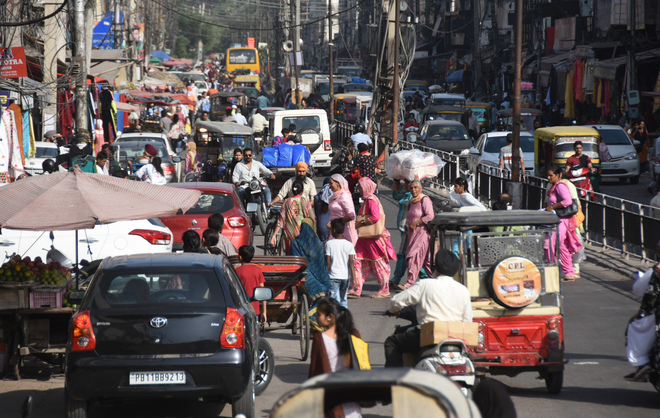 In the absence of parking facilities, visitors park their vehicles on the road at Field Ganj. Himanshu Mahajan

Amid the festive season, visitors are facing inconveniences at major markets in the city in the absence of parking lots. No concrete step has been taken by the Municipal Corporation, Ludhiana, to find out a permanent solution to parking and traffic-related issues at the markets despite demands of residents.

Commuters are generally forced to park their vehicles on roads due to lack of parking lots or designated space for parking of vehicles at prominent markets, including Ghumar Mandi, Model Town, Field Ganj, College Road and Old City markets. Also, most of the buildings at such markets lack parking arrangements.

Sanjay Goyal, chairman of the Indian Institute of Architects, Punjab chapter, and one of the directors of Ludhiana Smart City Limited (LSCL), said: “Traffic snarls and lack of parking lots are major issues in the city. There is no parking arrangement at many prominent markets of Ludhiana city. The city needs at least 20 multilevel parking lots for various markets here.”

Notably, the civic body and Ludhiana Smart City Limited had earlier planned for the construction of a few parking lots under the Smart City Mission but these projects could not see the light of day. The LSCL had proposed to construct a multilevel parking lot at Feroze Gandhi Market but nothing has been done at the ground level.

Goyal said: “During the festive season, a huge rush is witnessed at markets. The departments concerned should make parking arrangements to control the situation and ensure smooth flow of traffic.”

The commuters also face inconveniences due to the lack of parking arrangements on Ferozepur Road, Pakhowal Road, Deep Hospital Road and other roads. Even in residential areas such as BRS Nagar, Sarabha Nagar and Model Town, commercial units have come up in violation of the norms but under the nose of the corporation or other departments concerned. Most of these units also lack parking arrangements.

A road safety activist, Rahul Verma, said: “In recent meetings between police, MC, LIT and GLADA officials, the police had asked the departments concerned to identify vacant government land to be used as parking space to ease the traffic during the festive season. There are several identified sites in the city where parking arrangements can be made to ease the traffic congestion during the festive season. But, it seems that local bodies and GLADA were not interested in managing the traffic as no steps have been taken by them in this regard.”

Commuters are generally forced to park their vehicles on roads in the absence of designated space for parking at prominent markets of the city, including Ghumar Mandi, Model Town, Field Ganj, College Road and Old City markets. Also, most of the buildings at such markets have no parking arrangements.