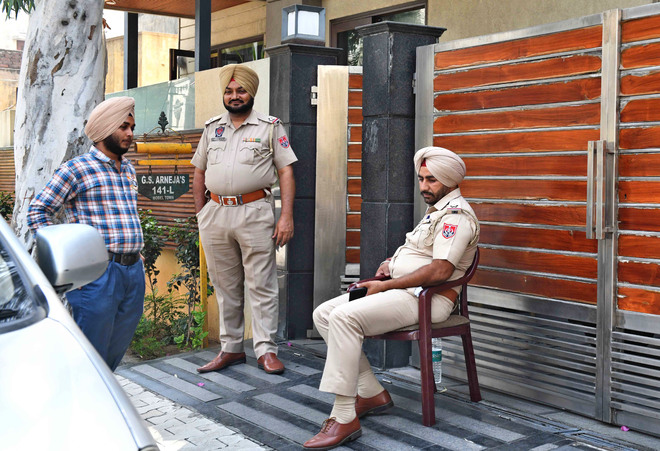 Police personnel deployed outside a cycle manufacturer’s house at Model Town during the Income Tax Department raid in Ludhiana on Thursday. Tribune photo

Sleuths of the Income Tax Department conducted raids on the factories and residences of several bicycle and its parts manufacturers at around 5 am today.

The officials of the department are tight-lipped on the raids. Till the filing of the report, the surveys-cum-raids were on. Well-placed sources inform that around 25-30 teams are conducting the raids. It is learnt that the raids are being conducted under the supervision of a woman official and the members of the teams are from Panchkula too.

The raids have reportedly been conducted on Arpan Cycles, Neelam Cycles, Gurdeep Cycles, Vishal Cycles, Raka Cycles, etc. The Dhandari and Focal Point units of these industries along with the residences have been raided by the Income Tax sleuths, whose number could be 50.

Reliable sources said the documents of the manufacturers have been confiscated. Many of the targeted bicycle manufacturers are “tender-based” companies, who get bulk orders. It is learnt that old records concerning tenders are also being checked and taken into custody to check if there were any discrepancies. The data from computers is also being checked and confiscated.

An Income tax official said since raids are still on, no clear picture could be given at this hour. He said once the raids are completed, briefing will be done by senior officials.

A bicycle manufacturer said he had gone to Sarabha Nagar, near premises of a manufacturer, but the area was cordoned off and none was allowed to go near the premises. “Even all phones are switched-off, we cannot contact anyone,” said the manufacturer.