Insanitary conditions worsen in colonies under Ward 28 in Ludhiana : The Tribune India 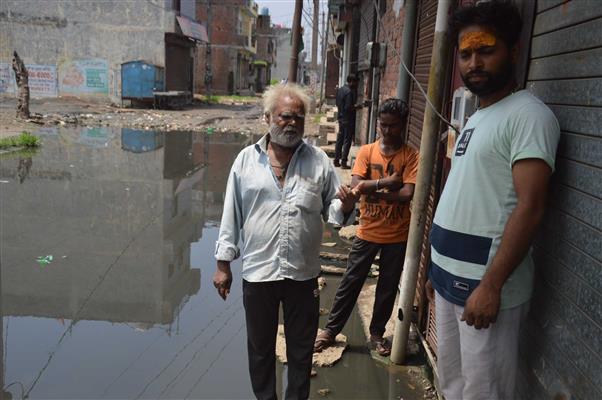 The husband of the deceased woman stands on a road flooded with sewage in Jagdish Nagar. Inderjeet Verma

After the death of a 48-year-old woman, Kalpana, at Jagdish Nagar in Ward 28 on Saturday, her family today blamed the contaminated water supply due to the Municipal Corporation’s overflowing sewers in the area for her illness and death.

The road outside Kalpana’s house is flooded with stinking sewage for the past few years due to the apathy of the civic body.

When she died two days ago, her kin while carrying the body for the last rites were forced to pass through a sewage-flooded stretch outside the victim’s house. Her family said they were being forced to drink contaminated water as sewage was getting mixed in the water supply line.

Kalpana’s husband Sanchit Kumar, a daily wager, said: “Sewage has accumulated outside our house for a long period and it is getting mixed in the water supply line. Whenever the tap is switched on, we initially get dirty stinking water. When water gets visibly cleared after some time, we use it for drinking and other purposes. But there is no water purifier at my home. How could I get the water filtered for my family?”

Sanchit said: “My wife also used to drink the contaminated water. She was ill for the past around 45 days. She was suffering from stomach ache with complaints of vomiting and loose stools. I had not enough money to take her to any big hospital for treatment. Later, she breathed her last.”

Kalpana’s neighbours said sewers had been overflowing here for the past four-five years and they get sewage-mixed water supply here.

“We get the MC’s water supply but it is contaminated due to the overflowing sewers”, they said.

Besides, residents of Prem Nagar, Durga Colony, New Durga Colony and nearby areas of Dhandari Khurd in Ward 28 are suffering a lot too. “The situation is worsening these days. The sewers overflow badly everywhere. None of the MC and the administration authorities visits the area. Our area falls under the Sahnewal constituency. But MLA Hardeep Singh Mundian did not visit here after the elections. The accumulated sewage water often gets mixed with water supply line,” a group of residents at nearby Durga Colony said.

There are some schools in the area and hundreds of students are also forced to pass through the sewage-flooded roads in routine.

MC Superintending Engineer Rajinder Singh said the problem related to overflowing sewers would be resolved as the sewerage disposal unit would be made functional on Wednesday. He, however, claimed that no death took place due to the contaminated water supply. A number of people have taken private water supply connections in several undeclared areas.

MC Commissioner Shena Aggarwal said she would look into the matter.

However, MLA Mundian and councillor Paramjeet Singh could not be contacted for comments.

No death due to contaminated water