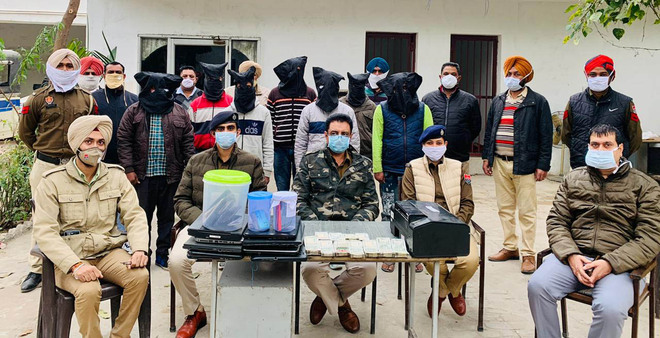 The suspects in the custody of the police in Ludhiana on Wednesday. Tribune photo

The police claims to have busted an inter-state gang of cyber criminals by arresting seven of its members.

The gang was busted in a joint operation conducted by CIA-II, cyber cell and the counter intelligence wing, the CP added.

“All the suspects are 10th passed. Instead of doing any job they took to cyber crime to make easy money,” the CP said.

“The police are checking bank accounts and online wallets of the gang, which will be freezed,” the CP added.

Revealing modus operandi of the gang, the CP said, “The gang collected documents like Aadhar and PAN cards of people in Punjab, West Bengal, UP, Jharkhand and other states. They used these documents to open insta bank accounts and as an identify proofs of the people to get SIM cards for use in cyber frauds.”

The gang used fake identity proofs like Aadhar and PAN cards for opening bank accounts mostly in ICICI Bank, the CP added. They also opened multiple bank accounts using IDs of innocent persons and sold their details to other fraudsters for about Rs1500 to Rs3,000, the CP said.

The gang also sold debit cards of these bank accounts to fraudsters for Rs3,000 to Rs4,000, the CP added.

The gang used fake identities to get online loan from apps like Dhani and Red Carpet and transferred the amount online into wallets and further to their personal bank accounts, the CP said. They committed a fraud of over Rs20 lakh in this way, the CP added.

The gang also fooled cab drivers by getting IDs and OTPs from them in the name of verification by Ola company and opened online bank accounts on the basis of such credentials of victims, the CP said.

They sold these accounts on WhatsApp/FB groups and sought refunds from Ola company, the CP added.

The gang sold Aadhar and Pan card details of innocent people without their consent through WhatsApp/Facebook groups, the CP said. The gang also took refund from Zomato and Swiggy fraudulently, the CP added.

One of the suspects was an employee Blue Dart company, the CP said. He helped other gang members to divert delivery of credit and debit cards applied on the basis of insta bank accounts, which were opened using Aadhar and PAN cards of people of different states, to their own addresses, the CP added. The courier boy used to get Rs 100 commission for each delivery, the CP said.