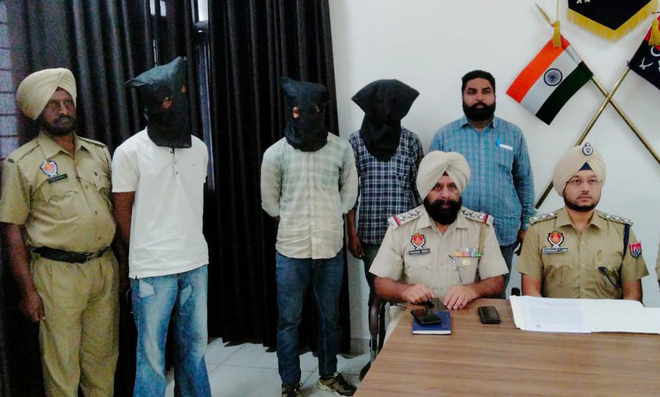 The three accused in police custody in Ludhiana. Tribune Photo

The Jamalpur police claimed to have solved a murder case in which a youth was killed by three persons on the night of October 15.

The police have registered a murder case against three persons, Deepak Sharma of Pipal chowk, Sahnewal, Munish Kumar of Avon Colony, Bhamian Kalan, and Ashish Pandey of Jamalpur. The accused were arrested late on Saturday night.

Station House Officer (SHO), Jamalpur police station, Inspector Kulwant Singh Malli, said on October 15 night, deceased Deepak Kumar’s friend Badal had come to the his house and took him along on a motorcycle. They went to Deepak’s brother-in-law’s house from where the trio went outside, somewhere in the city.

“At around 11 pm when they were crossing the Bhamian road to return home, they stopped on the road as the three accused had parked their motorcycle in the middle of the road, blocking the way. The deceased had asked the accused to remove their motorcycle from the place but the latter didn’t pay heed. Afterwards, arguments started between both groups,” the SHO said.

Kulwant said deceased’s friend Badal pacified him after which they were about to leave the spot when Deepak hurled abuses at the accused following which they attacked the victim badly.

To save their lives, deceased’s friend and brother-in-law escaped from the spot. After some time, when the assailants fled the spot leaving the victim almost dead, the duo returned and rushed Deepak to a hospital where doctors declared him brought dead, the SHO said.

The police said so far no past criminal record of the arrested accused has come to the fore.