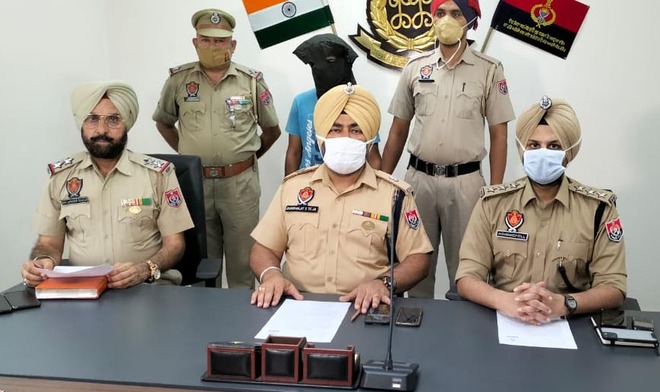 The accused in police custody in Ludhiana on Saturday. Tribune photo

The city police have arrested a key member of a gang of vehicle thieves and recovered stolen vehicles from them.

The accused has been identified as Gurmukh Singh of Dashmesh Nagar, Sahnewal. The police recovered four motorcycles, a scooter and a car from him.

ADCP Jaskiranjit Singh Teja in a statement issued here today said the Sahnewal police had received a tip-off that Gurmukh was running a gang of vehicle thieves and he had stolen several vehicles from the industrial hub. Today, he was on the way to Sahnewal to sell a stolen motorcycle.

The ADCP said accordingly, a naka was laid at a strategic point where the bike-borne accused was intercepted and arrested.

During the questioning of Gurmukh, he confessed that he, along with his gang members, Baljinder Singh Golu of Preet Nagar, Shimlapuri, Mandeep Singh Deepa of Rose Enclave and Mandeep of Lohara, had been committing vehicle thefts.

The ADCP said the police obtained two-day police remand of the accused so that in further interrogation, more members of the gang could be nabbed and more stolen vehicles could be recovered.