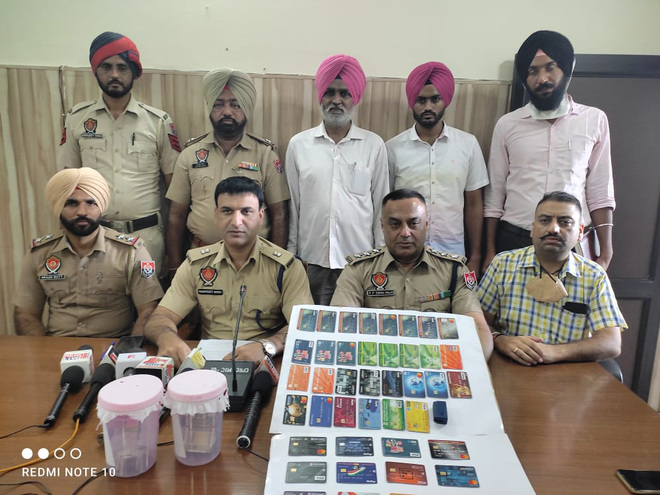 The Khanna police claimed to have unearthed two interstate gangs of ATM fraudsters with the arrest of seven persons who used to operate in Punjab, Haryana, NCR Delhi and Uttar Pradesh.

Giving information, SSP, Khanna, Gursharandeep Singh Grewal said acting on a tip-off, the police set up a checkpoint on Malerkotla Chowk and stopped a Baleno car (HR-28J-4278) coming from the Lalheri Chowk side.

Initial interrogation revealed that the accused used to insert the specially-made hook in the cash dispensing tray of the ATM once money was dispensed while withdrawing money from ATMs. Then they used to switch off the power supply of the ATM and take out the money and also remove the hook from the tray. Later, they used to lodge online compliant to the bank for refunding their money, which was allegedly stuck in the ATM. It was learnt that they had committed such frauds worth over Rs 6 crore at the ATMs located in Goa, Kerala, West Bengal, Delhi NCR, UP, Maharashtra and some other states.

In a separate operation, the Khanna police nabbed four members of another gang which was involved in duping people by cloning their ATM cards. The accused were intercepted from near Pristine Mall on GT Road on the basis of reliable tip that they were coming in a Swift car (HR-64A-7443).

A case under Sections 420, 467,468, 471, 380 and120-B of the IPC has been registered against the fraudsters and police recovered 30 ATM cards of various banks and two ATM card cloning machines from the possession of the accused. The modus operandi of the gang was to clone or swipe the ATM cards of elderly or illiterate persons and then sell the ATM data.