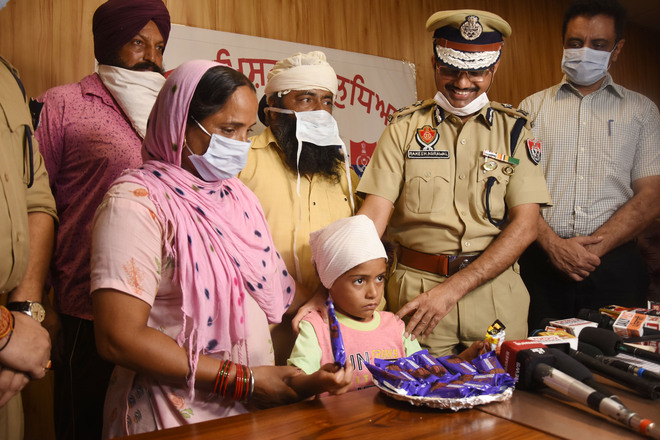 Two days after a migrant servant kidnapped a six-year-old boy from Raur village, near Meharban, the Ludhiana police and villagers rescued the child safely from the forest area of Garhi Sheru near the Sutlej.

The kidnapper after seeing the villagers jumped into the river while leaving the boy on the road but he was taken out from the river and the boy was handed over to the family.

The kidnapper had demanded Rs 4 lakh ransom to release the child.

The servant has been identified as Vijay, alias Akash, native of Sikarpur, Uttar Pradesh.

Rakesh Agrawal said search and raid parties were sent not only within the district, but also in the adjoining districts and other states.

“Technical teams were deputed for gathering technical leads for the rescue of the child and arrest of the kidnapper. At the same time villagers were roped in to aid the police teams in search operation,” added CP Agrawal.

The child’s father Paramjit Singh, who is physically challenged, said the servant was employed by them on July 18 through some known contacts. He said they trusted him and didn’t check any identification proof. The servant kidnapped their son on July 29. He took their Activa scooter and later abandoned it at a distance.

The police had sent one team to the servant’s native place in UP. His wife and father were also rounded up for questioning. The account number given by the kidnapper for getting the ransom money, is of his father Meva Lal.

This morning, a team of villagers and police raided the area near the Sutlej and recovered the child. The kidnapper was badly beaten up by the angry villagers. “The kidnapper was hiding in the bushes along with the boy. After seeing the villagers he jumped into the river. The child was recovered,” said Amarinder Singh Sonu, sarpanch, Boothgarh village.

After the child was kidnapped, 400 villagers formed teams to conduct search of the forest area, nearby towns and districts. Some team members remained with the police. ADCP Rupinder Sra and ADCP Rupinder Bhatti supervised the entire rescue operation for day and night to trace the child.