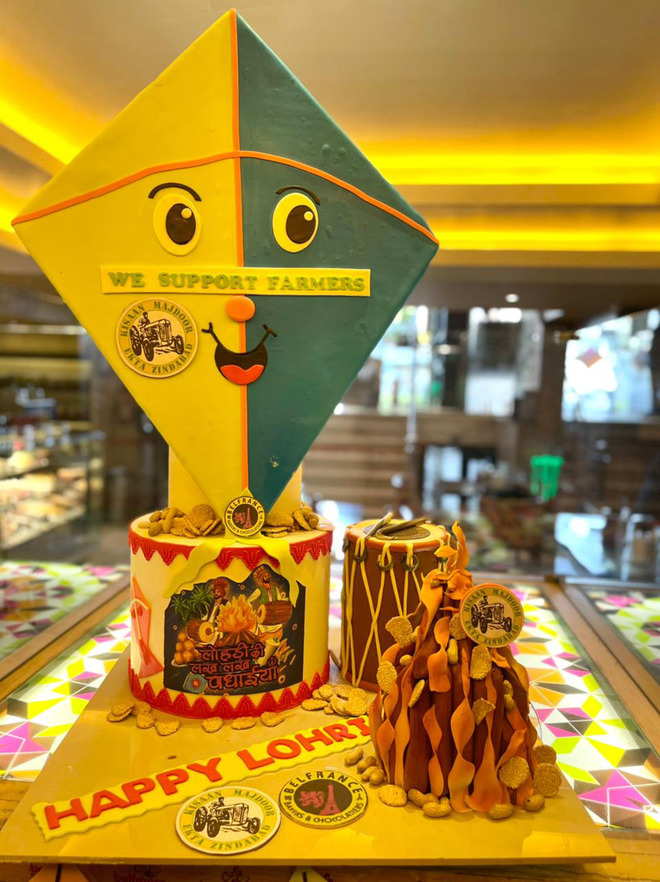 Special themed cakes for Lohri prepared by bakers were dedicated to farmers in Ludhiana on Wednesday. Tribune Photo

Lohri was celebrated with religious fervour in the city. Revelers enjoyed the festival by flying kites while loud music was played to make the festival more special. Though flying of kites was comparatively less in posh areas of the city, in interior parts, groups of youngsters were seen having fun throughout the day.

Dedicating the festival to farmers, protesting in Delhi for the withdrawal of farm laws, Hot Breads here made a special effort today. They prepared cakes with the theme ‘Farmer and Lohri’. Different cakes were made on the theme ‘Lohri’ in the shape of colourful kites.

Harjinder Singh from Hot Breads said: “We have made Lohri-themed cakes with farmers’ logos. Lohri is a special festival that represents the state. Though Punjabis are celebrating the festival in a traditional way, everyone has farmers on their mind. Our effort is to represent the mood of society. By creating ‘Farmer’ theme Lohri cakes, we are enabling people to participate in the celebrations while keeping farmers in their thoughts. A large cake of 12 kg made by us has all elements of Lohri. We have made images of dancing farmers, bonfire, traditional Lohri sweets, etc, on cakes.”