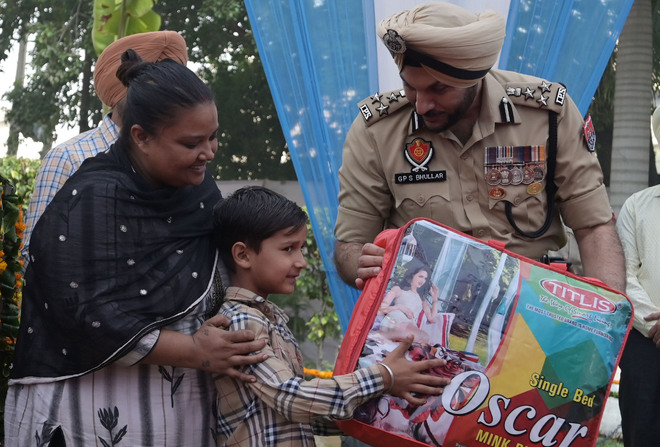 Commissioner of Police Gurpreet Singh Bhullar interacts with kin of martyrs at the Police Lines in Ludhiana on Thursday. Tribune photo: Himanshu Mahajan

The Ludhiana police, led by Commissioner Gurpreet Singh Bhullar, today observed Police Commemoration Day at the Police Lines here to pay tributes to the martyrs belonging to the police and paramilitary forces.

Bhullar urged people to fight the anti-national forces jointly. “It is only because of the great sacrifices of our martyrs that we are living in a peaceful environment and communal harmony,” the CP said.

Bhullar paid tributes to the police and paramilitary personnel who attainted martyrdom in different parts of the country. A contingent of police gave salute to the martyrs and officials and dignitaries present on the occasion observed a two-minute silence to pay tributes to the martyrs. List comprising names of officials and jawans of the police and paramilitary forces who sacrificed their lives during the past one year was also read out.

The CP said all the state police forces and the paramilitary forces throughout the country pay tributes to the jawans of the CRPF who attained martyrdom on October 21, 1959, at Hot Springs (Ladakh) during an assault by the Chinese army.

The CP said during the dark days of terrorism, a total of 117 police personnel of the Ludhiana police laid down their lives while combating terrorism.