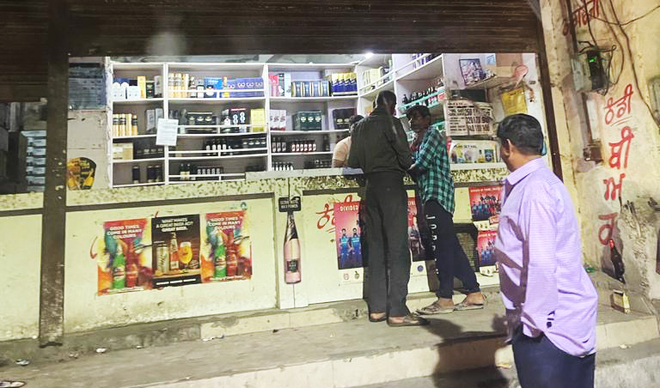 A number of booze lovers were seen at some liquor vends in Ludhiana on Tuesday night. Tribune photo

Liquor vends were found open in some areas in the city during the night curfew, which starts at 8 pm.

This Tribune correspondent along with photographer conducted a reality check on Tuesday night. It was observed that more than 90 per cent shops and other commercial establishments were lying closed following the night curfew norms. The only shops found open were liquor vends in some city areas.

A number of booze lovers were noticed at some liquor vends, where employees of liquor contractors were openly selling liquor during night curfew.

At around 9.15 pm, liquor vend Param Wines and Sharma Brothers at Wadi Chandar Nagar Pulli was open. At this vend, the shutter was down but liquor was being sold through the holes made in the shutter.

A liquor vend near the Police Lines, Ludhiana, was also seen selling liquor.

Malik Wines at Jawala Singh Chowk, near the Jagatpuri Police Post, was also seen selling liquor. The entire market around the vend was lying closed. The vend had also not closed shutter, despite its location near the police post.

Only two FIRs against liquor vends

After Tribune report, the Ludhiana police registered an FIR against the owner of Basant Ice-Cream at Fountain Chowk. On March 27, The Tribune had carried a special report that the ice-cream parlour, which is owned by a ruling party leader, paid scant regard to the night curfew orders. On April 17, the police registered a case under Section 188 of the IPC.