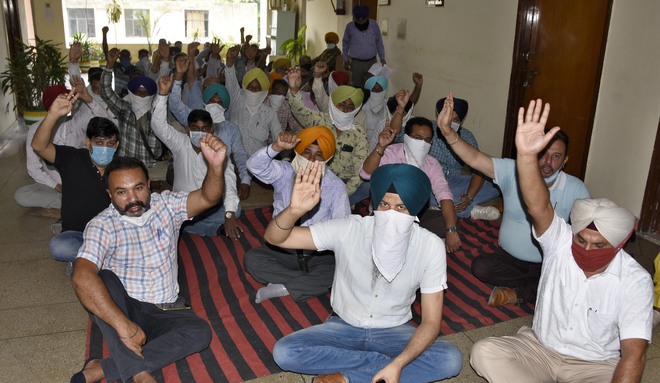 Employees and officials of the Ludhiana Improvement Trust stage a protest demanding arrest of culprits who assaulted a team of officials during an anti-encroachment drive in Model Town Extension (Part I), on Thursday. Tribune photo: Himanshu Mahajan

Employees and officials of the Ludhiana Improvement Trust (LIT) today held a protest in front of their office in Feroze Gandhi Market in protest against inaction by the police against the culprits named in the FIR registered with regard to an attack on the Trust officials during the demolition and anti-encroachment drive in Model Town Extension (Part I) on Dugri Road on Tuesday.

In a memorandum submitted to the Deputy Commissioner, the Commissioner of Police and the Chairman of LIT, the protesting officials and employees said even though the police had registered a case under sections 353, 186 and 149, IPC, against prime accused Sonu Jatt and his accomplices for assault on members of the LIT team, no arrest had been made so far.

The LIT officials termed the act of unlawful occupants of the government land as naked show of “goondaism” and muscle power. “The prime accused Sonu Jatt and his accomplices, including family members, hurled abuses, engaged in a scuffle and manhandled officials while the police watched everything like a mute spectator,” they said.

Trust Engineer Jagdev Singh said there was a sense of fear and insecurity among the employees and officials and they would not be in a position to carry out such duty for removal of encroachments in future if stern and exemplary action was not taken again those taking law in their own hands and dare to attack the officials and employees who were performing their duty.