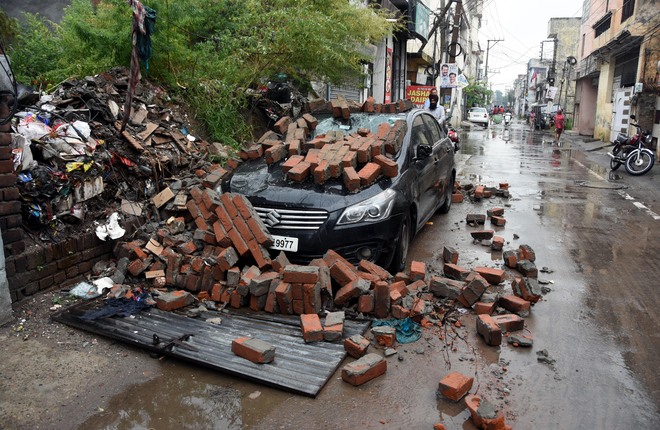 As the 133.6 mm rainfall lashed the city, waterlogging occurred in various parts of it, exposing the MC’s ill-preparedness for the rainy season once again. A number of commuters struggled as their vehicles developed snags while passing through waterlogged roads.

A portion, wherein interlocking tiles were installed recently, on Hambran Road has caved in amid the rainfall. A vehicle also got stuck as a portion of the road sank at Barewal, Ludhiana. It is learned that the road was earlier dug up for project work.

After rainfall, a wall got damaged and its debris fell on a car that was parked along the wall in the Dugrapuri area in Haibowal. The car got badly damaged.

Meanwhile, the condition of various potholed roads turned worse on Friday. However, the MC had got the potholes patched on the routes designated for the visit of the Secretary of the Union Ministry of Housing and Urban Affairs. But, many of the badly broken roads are still crying for attention.

A resident, Gaganpreet Singh, said, “The authorities concerned should ensure repair of the all broken roads in the city without any delay. Waterlogging on potholed roads is an open invitation to the mishaps.”

The rainfall had started late on Thursday night and continued till this morning.