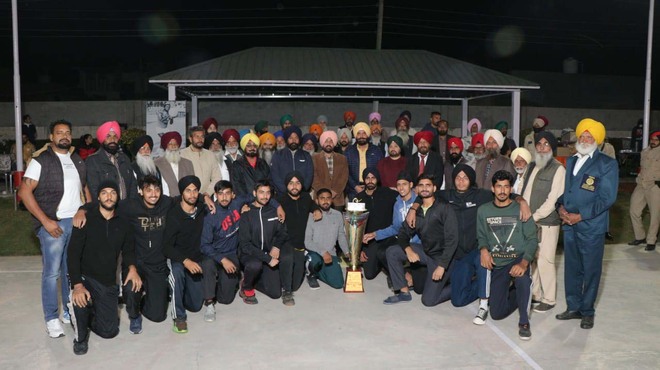 The winning teams of the Ludhiana Basketball Academy and Amritsar during the Senior Punjab State Basketball Championship at Gureh village near Jagraon. Tribune photos

Giving a consistent performance, the reigning champions, the trainees of the Ludhiana Basketball Academy (LBA) came out triumphant to retain the title in the men’s section in the 72nd Senior Punjab State Basketball Championship for Men and Women that concluded at Gureh village near Jagraon in the district on Sunday.

In the women’s section, Amritsar proved their mettle to lift the title.This year’s championship was dedicated to the memory of Arjuna awardee Gurdial Singh Malhi of this village.

In the men’s final, LBA players outperformed Jalandhar 90-72 to lay their hands on the winners’ trophy while in the match for the hard-line cup, Gurdaspur outwitted Amritsar 82-69 to secure the third position.

In the women’s section, the final was played between Amritsar and Ludhiana Basketball Academy in which the former resisted a strong challenge to clinch the issue 83-65 and Sangrur defeated Ludhiana district 75-50 to finish at the third place.

and vice-president of the association, were the guests of honour.

Speaking on the occasion, Dhaliwal said the Basketball Federation of India had now launched its Indian National Basketball League (INBL) on the pattern of USA’s NBA leagues which would attract more youngsters towards the game as they would be financially helped through the league system. He also said the PBA plans to train new coaches throughout the state.

Brij Goyal and Richu Sharma from the District Basketball Association, Ludhiana, said to further promote the game in

countryside, the association would distribute 2,000

basketballs and poles in village schools.