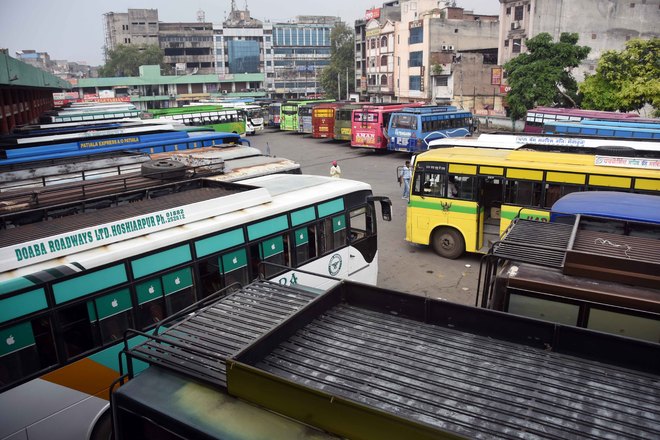 The bus stand wears a deserted look during the strike by contractual employees in Ludhiana on Monday. Tribune photo

The government-run bus service was badly hit and passengers were left to suffer as the contractual employees of the PRTC and PUNBUS went on an indefinite strike on Monday.

The employees are demanding from the government adding of a fleet of 10,000 more buses to the service and regularisation of services of all contractual staff of the PRTC and PUNBUS. They blamed the government for failing to meet their demands due to which they were forced to go on strike.

To mark their protest, a large number of employees staged a dharna at the Amar Shaheed Sukhdev Interstate Bus Stand Ludhiana today. The protesters alleged that the government has been ignoring their demands for a long time despite staging of protests by them in the past too.

The majority of government buses were not operational here today due to the strike. However, private buses plied on the roads.

Satnam Singh, a union leader, said, “Around 7,600 contractual employees of the Punjab Roadways and PUNBUS in the state, including about 600 of Ludhiana district, are on an indefinite strike. We will continue our strike till the government meets our demands.”

Members of the Punjab Roadways Pensioners Association have also extended support to the contractual staff. They blamed the state government for making attempts for the privatisation of the government departments.

The protesters said if their demands were not met, they will intensify the agitation.