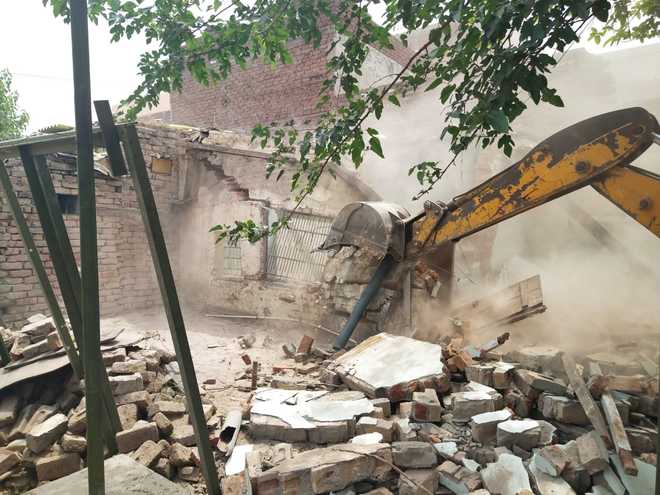 People whose houses were demolished said they had been living there for the past few decades. They said they had no information that the MC would demolish their houses today.

Some dwellers said they had purchased houses from other persons but they were not told by them that the land belongs to the government.

Dilbagh Singh, a resident, said: “I had purchased my house years ago but I had no information that the land belongs to the government. We are not in a condition to buy a new home.”

A resident said: “The MC team suddenly reached the spot to demolish our houses. No prior notice was served. Our financial condition is not good. The government should ensure our rehabilitation instead of demolishing our shelters. We have no arrangements to stay under the roof. After our house was demolished, our family is forced to stay without a roof now.”

Meanwhile, questions are also raised over the role of the MC for not taking action against big encroachments.

MC’s ATP MS Bedi was present during the anti-encroachment drive. Civic body officials said these encroachments were earlier identified and a red sign was marked on buildings constructed on the encroached land.

The MC had planned to remove encroachments in Shivpuri in the Zone A area along the Buddha Nullah today. When the team visited the place, some residents opposed the MC team.

Parveen Dang, an activist, said: “The MC was going to demolish the buildings without serving any notice on occupants. People are living there for three decades. Moreover, residents have ownership documents. We asked the authorities to check the documents first.”

After facing opposition, the MC team returned from the area. ATP Mohan Singh could not be contacted for comments.