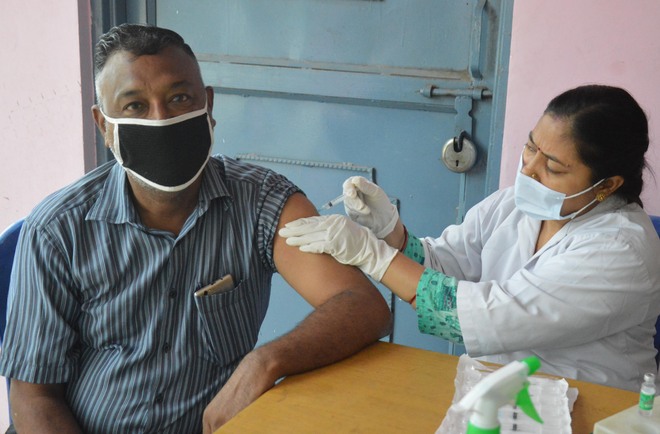 A man gets vaccinated against Covid in Ludhiana. Photo: Inderjeet Verma

Continuing to show the signs of gradual retreat and plateauing of the impact of the devastating second Covid wave, Ludhiana district’s daily deaths due to the deadly virus have plummeted to single digit, recording the lowest death toll in the last 48 days.

Also, the district’s daily case fatality ratio (CFR) has fallen drastically to below 2 per cent and the cumulative CFR has dropped to less than 2.5 per cent.

Significantly, the death percentage of Ludhiana, which has made a remarkable turnaround from the worst-hit to the safest district in Punjab, has touched a record low of 2.48 per cent.

The daily CFR touched a low of 1.35 per cent on June 1, which was lowest after 1.27 per cent recorded here on May 9. Since then, the 24-hour case fatality ratio has been on a constant rise and had touched the peak of 4.57 per cent on May 26. In the first peak, the district had reported a record high daily CFR of 10.26 per cent on August 2.

Similarly, the cumulative CFR has also witnessed a steep decline to reach a low of 2.37 per cent for three consecutive days since June 1. It has dipped from the high of 3.9 per cent on January 1 and the record high of 4.29 per cent during the first peak on September 11.

The data compiled by the district administration, which is available with The Tribune, revealed that the daily casualties touched the lowest mark of 3 on June 1, which was on a par with as many deaths reported here on April 13. Since then, the daily death count has been on an exponential rise with the 24-hour death toll touching its peak of 30 on two consecutive days — May 10 and 11. This excluded the virus deaths of patients from outside Ludhiana reported in the district.

The district has been reporting the single-digit daily death count since May 31 when eight locals lost their lives to Covid. Since then, the death toll continued to remain low for the four consecutive days with the district reporting three Covid deaths on June 1; 5 on June 2; and 6 on June 3.

The Covid death percentage in the district also touched a record low of 2.48 per cent on June 2 and 3, which was the lowest so far. It had touched its peak of 5.29 per cent during the first peak on August 17 last year, while this year it has been constantly declining from 3.95 per cent recorded on January 1.