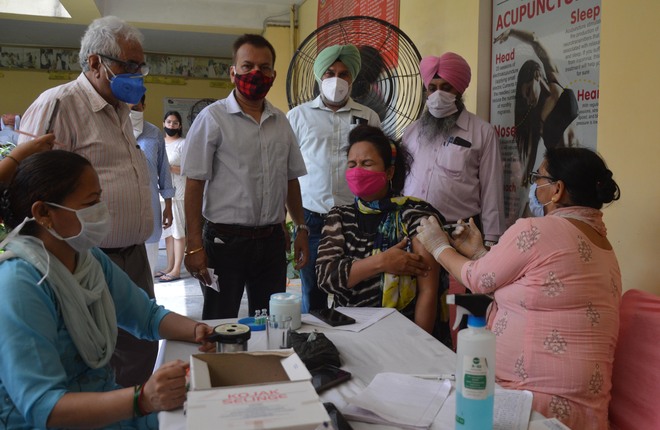 A woman gets vaccinated against Covid in Ludhiana on Friday. Photo: Inderjeet verma

It’s official! Ludhiana has turned into the safest district in Punjab. Having assumed the dubious distinction of being the worst-hit district with the maximum number of daily Covid cases and deaths till last month, Ludhiana has made a remarkable turnaround by recording the lowest daily positivity rate, a key indicator of virus surge, even below 1 per cent.

If it was mayhem in May when the second Covid wave had rapidly slid into a devastating crisis with the health facilities unbearably falling short, oxygen supplies running low and many dying even without seeing a doctor, June gave a sigh of relief with the signs of gradual retreat and impact of deadly virus plateauing.

The safe state of Ludhiana continued in the current week as well with the district’s average daily Covid positivity rate further dropping to 1.1 per cent on June 7, which was less than half of the state’s average of 2.57 per cent. On June 8, the ratio of positive cases fell even below 1 per cent at 0.98 per cent, lowest in four months after 0.99 per cent recorded here on February 7. This was again almost three-times less than the state’s average of 2.47 per cent.

The hit rate further dipped to 0.87 per cent on June 9, which was lowest in almost five months after 0.87 per cent registered on January 18. This was also almost three-times less than the state’s average of 2.29 per cent.

This U-turn was all the more significant as the daily positivity rate has dropped by a whopping 18.73 per cent from the highest-ever ratio of 19.57 per cent in little over a month. The district had touched its peak of virus surge on May 2.

The data compiled by the district administration, which is available with The Tribune, revealed that the daily hit rate has been plummeting constantly since the last week of May.