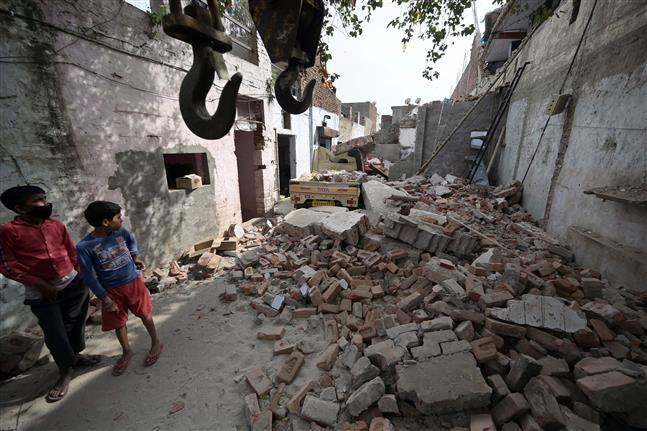 Parts of a concrete roof that collapsed and fell on vehicles at Baba Mukand Singh Nagar , Daba Road in Ludhiana. Tribune file photo

The death toll in Ludhiana roof collapse incident from two days ago rose to five on Wednesday after another person died of his injuries.

Authorities from the district administration identified the latest victim of the roof collapse at Jasmail Singh and Sons auto spare-part factory in Ludhiana’s Baba Mukand Singh Nagar as Santosh Kumar, a 31-year-old man originally from Bihar who was a foreman in the adjoining GK plating factory.

He was among the five people wounded from his own plant when debris of the collapsed concrete roof fell on the adjoining building as well.

Santosh Kumar had head injuries from the accident, and was taken first to a government-run hospital in Ludhiana, which sent him to SPS Hospital because of his critical condition.

His colleague, a 27-year-old man identified as Sagar Kumar, died on Monday.

Tejinder Singh, the owner of the GK Plating unit, said Santosh Kuamr’s family had been informed.

Three other workers from his factory wounded in the incident are believed to be improving, he said.

He demanded compensation for the losses he suffered, which he estimates to be Rs 20 lakh.

“After the roof of neighboring unit collapsed, the debris that fell on our factory has damaged both the building structure and our machines. We must be compensated for this,” Singh said.