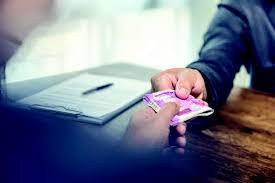 A fake deed writer and his associate were today caught red-handed by Vigilance (EOW) team Ludhiana for demanding a bribe to get power of attorney registered.

Senior Superintendent of Police (SSP), Vigilance, Surendra Lamba, said a Ludhiana resident had lodged a complaint that Ajinder Singh, an associate of fake deed writer Surinderpal, demanded Rs 15,000, including Rs 8,000 as bribe, for getting the power of attorney registered at the Sub-Registrar (west) office.

Following which, a team of Vigilance (EOW), Ludhiana, while following the due procedure had caught Ajinder red-handed with Rs 8,000 bribe money along with Surinderpal, Lamba said.

Further necessary legal action was being taken under Section 7A of the Prevention of Corruption Act in the case and detailed investigation would be carried out, as per law and procedure, the SSP said.