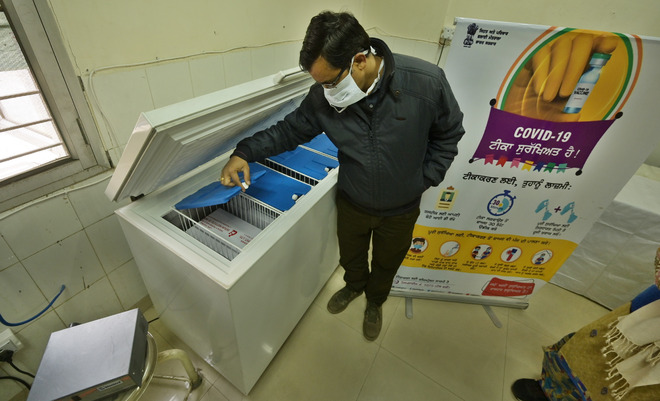 Covid vaccine stored in a refrigerator at the Civil Surgeon's office in Ludhiana. Himanshu Mahajan

Ludhiana district today received its first share of Covid vaccine Covishield. The district has received 36,000 doses of the vaccine and these have been stored at the Civil Surgeon’s office.

He said it was due to their faith in the vaccine that over 30,000 doctors and healthcare workers would be administered doses of the vaccine in the first phase in the district alone.

The vaccination for doctors and healthcare workers of the district would be held from January 16 to 18.

The Deputy Commissioner urged residents to not to believe in any rumours spread through social media. Sharma said the vaccine had been launched after carrying out several trials and there was no need to panic. People should understand that if the doctors and healthcare workers have themselves volunteered for the vaccination, it shows that they have full faith in it.

He said getting the vaccination done was purely voluntary. However, he appealed that everyone should get vaccinated.

The Civil Surgeon said several locations had been identified in the district where vaccination would be carried out by teams of expert doctors.

He said in the first phase, over 30,000 healthcare workers, both from government and private sectors of the district would be administered the vaccine, followed by anganwari workers, people aged above 50 years, people below 50 years with comorbidities and others.

He clarified that the vaccine would not be available off the shelf for the time being and only people who have got themselves registered on the government portal would be covered under it.

He said on registration, the beneficiaries would receive an SMS informing the date and place where the vaccine would be administered to them.

Dr Bishav Mohan said even cured Covid-19 patient should get himself vaccinated. He said the vaccination would be done twice (once every two weeks) and when one gets vaccinated for the second time, they would be fully safe from the Covid-19 virus after further two weeks of getting second shot of vaccination.

“For example, if a person gets vaccinated today, he/she would be vaccinated again after 14 days (for second shot). Upon the completion of 28 days (both shots administered), he/she would have to wait for another 14 days to be fully safe from the virus. Till then, people should keep taking precautions,” he said.