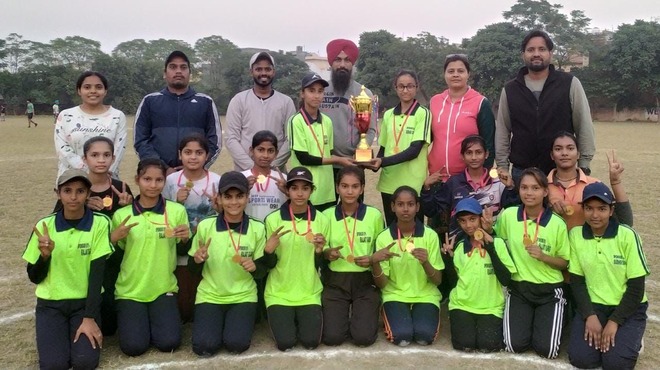 Members of the winning team of Ludhiana in a jubilant mood on Thursday. Tribune photo

Hosts Ludhiana proved too good for their opponents from Moga as they beat the visitors hands down to clinch the title in the girls’ section in the 8th Sub-Junior Punjab State Baseball Championship that concluded at Government Girls Senior Secondary School grounds, Gill village, near here, on Thursday.

The final turned out to be a mismatch in which city players overwhelmed Moga 16-1 to annex the winners’ trophy. The main architects of this victory were Ludhiana, skipper Kulwinder Kaur, besides Dilpreet Kaur and Ashika Bhandari, all students of Government Girls Senior Secondary Smart School, Gill, who contributed three runs each to help their side emerge triumphant.

In the match to decide the third position, Sangrur trounced Fazilka 11-1 with the main contributions coming through the duo Ramandeep Kaur and Seema who scored three runs each.