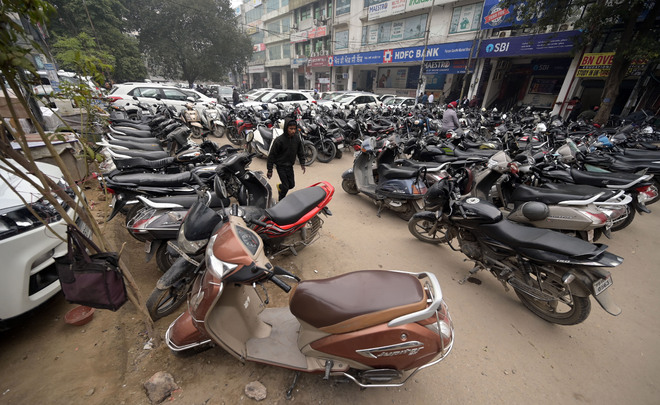 Even after one-and-a-half month after holding an e-auction of paid parking lots, no concrete steps are being taken to check violations at parking lots. Earlier, members of the Feroze Gandhi Market Association had also demanded from the civic body to formulate a committee to keep a check on violations at the parking lots but to no avail.

Notably, an employee of a private firm who looks after a multilevel parking lot near Mata Rani Chowk was recently booked for “overcharging”. Visitors had been complaining about overcharging at the multi-level parking lot, Bhadaur House market, Feroze Gandhi Market and other parking lots in the city in the past too but no concrete action was taken to check such violations.

At some of the parking lots in the city, manual tickets are still being issued to visitors instead of mandatory e-tickets. Besides, parking fee boards have not been displayed properly at most of the sites designated for parking of vehicles. As per the tender conditions, contractors were supposed to make sure their workers should be in proper uniform at the lots but no steps taken for the same. CCTV cameras were not seen at a number of locations. Moreover, the MC has not displayed any helpline number for visitors at the lots.

Col Harjap Singh, chairman of the Feroze Gandhi Market Association, said there was no check on violations at the parking lots in the market.

“We have been demanding from the MC to set up a monitoring committee, comprising the MC, police officials, representatives from the market association and the public, to keep a check on violations so that visitors don’t face any inconvenience. We don’t know why the MC is ignoring this demand for a long time,” he said.

He said: “We have given a memorandum to the Mayor about issues related to the market. In the memorandum, we have requested the MC again to set up the committee.”

Howewever, MC’s tehbazari chief Neeraj Jain said he would look into the matter.