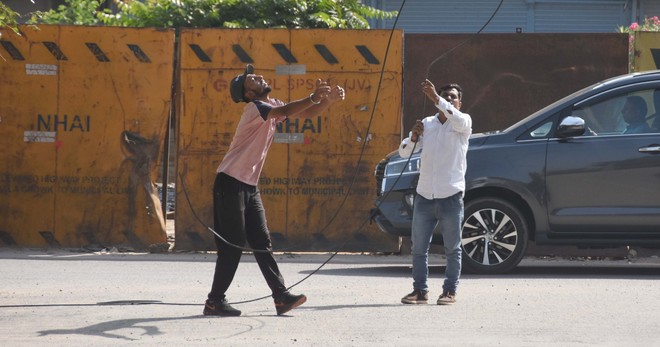 Workers repair wires outside the Circuit House in Ludhiana on Tuesday. Tribune photo

In view of the visit of the Chief Minister and Cabinet Ministers to Ludhiana on Wednesday, MC officials remained busy making required arrangements on Tuesday. The MC chief, Pardeep Kumar Sabharwal, has fixed the responsibilities of the officials too.

A Cabinet meeting of Punjab Government is going to be held at Circuit House in Ludhiana for the first time. Chief Minister Charanjit Singh Channi would also participate in the Progressive Punjab Investors Summit at Kings Villa in Ludhiana.

The Superintending Engineers of the O&M Branch of the MC have been directed to ensure the functioning of the sewerage system in their respective zones. The Health Officer and Chief Sanitary Inspector concerned have been instructed to ensure cleanliness and timely lifting of waste in the city.

The officials of the B&R Branch have been directed to ensure repair of potholes. The roads leading to the Circuit House were being cleaned today.

Municipal Town Planner has been instructed to ensure the removal of temporary encroachments on the roads that lead to Circuit House and Kings Villa. The senior veterinary officer has been asked to ensure the shifting of the stray cattle from city roads. The Zonal Commissioners would get all these works done in their respective zones. — TNS