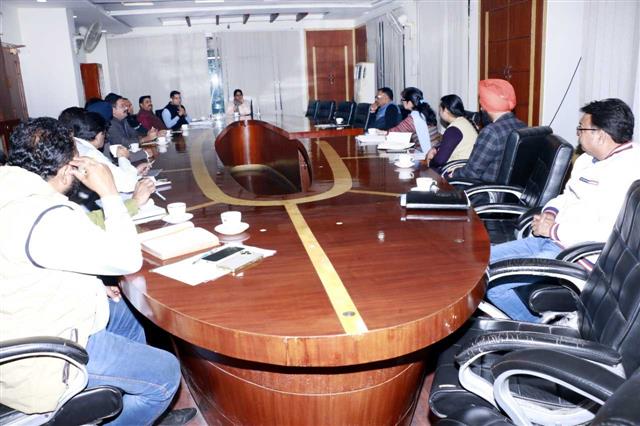 A meeting to hold discussion on reuse of treated water of STPs for dyeing industry, irrigation and other purposes in progress at the MC’s Zone D office in Ludhiana. Tribune photo

In the meeting held at the MC Zone D office in Sarabha Nagar, officials deliberated upon how the treated water could be used in dyeing industry, for irrigation purposes in farms and for watering parks in the city.

MC Additional Commissioner Aaditya Dachalwal said the initiative had been taken under Atal Mission for Rejuvenation and Urban Transformation (AMRUT) scheme. In the first phase, steps were being taken to reuse 25 per cent of the total capacity of 225 mld STP being established in the Jamalpur area (near central jail on Tajpur road). All STPs would be covered in the next phases of the project.

The MC Commissioner instructed Soil Conservation Officer Shavinderpal Kaur to look into possibilities of reusing the treated water for farming purposes and submit a report in the coming days. She said a plan was also being chalked out to reuse the treated water for watering the parks situated in different parts of the city.

The representatives of industry and officials of different departments have been directed to look into the possibilities of reusing the treated water and submit the suggestions with the MC in the coming days, so that further steps could be taken, she added.