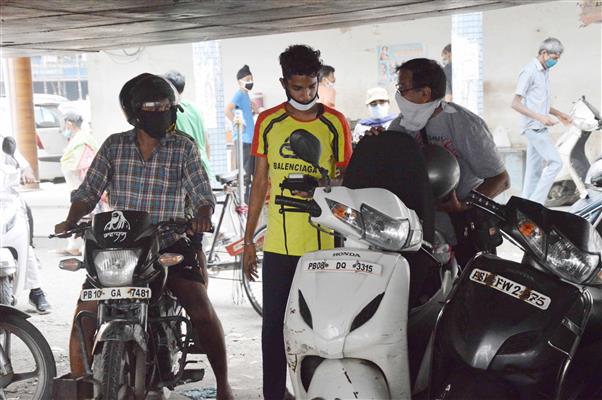 Though the Municipal Corporation (MC) is going to hold fresh auction of six parking lots in the city, members of two market associations have raised issues related to paid parking system.

The e-auction for multilevel parking lot near the MC Zone A office and parkings at Model Town Extension (Tuition market), BRS Nagar (near Orient Cinema), Bhadaur House, Sarabha Nagar I-Block and Feroze Gandhi Market will be held in the first week of October.

Shopkeepers associated with BRS Nagar F Block Market Association demanded that the MC should discontinue paid parking system at their market. A delegation of market association led by its president Dilbagh Singh met MC officials in this regard.

Members of the Feroze Gandhi Market Association have demanded that the MC should not handover parking lots to any private contractor.

“The MC should manage all parking lots at the market. The civic body should deploy its own staff for charging prescribed parking fee from visitors. Parking lots should not be handed over to any private contractor. Many contractors in the past, fleeced visitors, but the MC took no action against them. A monitoring committee should be formed to keep a check on parking lots,” said association members.

Complaints of overcharging at various parking lots, including multi-storey parking near MC headquarters, Feroze Gandhi Market and Bhadaur House, were reported in the past.

In 2018, an MC Joint Commissioner had caught parking staff overcharging fee from visitors at some lots in the city. After repeated attempts, the MC cancelled contracts of erring contractors, but they were not blacklisted. Erring contractors were even allowed to participate in auction of parking lots in 2019.

A BJP leader Vineetpal Singh Monga said, “I along with my relatives parked a car at multi-storeyed parking lot near the MC headquarters last month. The staff charged more than prescribed parking fee at the lot. Parking contractors, who are habitually overcharge, should be blacklisted. If a blacklisted contractor tries to participate in an auction under name of another firm, the MC should take required action against him.”

The contractor, who placed highest bid for Feroze Gandhi Market parking lots earlier this year, did not start operations. Now, the MC will hold fresh auction of these parking lots. Senior Deputy Mayor Sham Sundar Malhotra said, “A senior official concerned has informed me that a notice has been issued to blacklist the contractor concerned.” However, Mayor Balkar Singh Sandhu said, “Orders have been issued to seize the security amount deposited by the contractor, but not blacklist him. A monitoring committee will be formed for parking lots this time.”

Earlier, the MC had ordered to debar another contractor, who refused to manage Feroze Gandhi Market parking lots after placing highest bid of Rs8.02 crore in 2019.