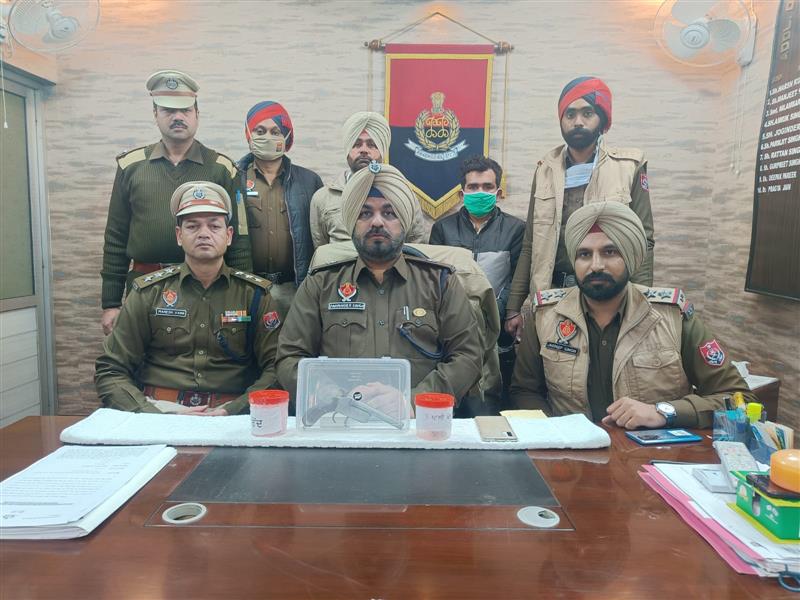 The accused in police custody in Ludhiana on Thursday. Tribune photo

The police have arrested a person, identified as Raman Kumar, alias Ashu, and his accomplice Laadi, who is at large, has been booked under Sections 307, 336 and 427 of the IPC and Sections 25, 27, 54 and 59 of the Arms Act. The police claimed to have seized a countrymade pistol, two live cartridges and three spent shells from the spot.

Madan Lal, a medical store owner and a resident of Kabir Nagar, here, had lodged a complaint with the police that Raman

and Laadi had attacked him and one of the accused had also made an attempt to shoot him with his pistol but the weapon misfired.

He said thereafter, the duo created a scare in the area by firing shots in the air and fled the spot on their Honda Activa scooter.

According to the complainant, the trouble began when the motorcycle of two youths from the same locality had slightly touched the mini-truck of the accused. Angered over the incident, the accused started beating the motorcycle-borne youths, Angad and Karan. When the complainant intervened, they threatened him with the fire arm and also made an unsuccessful attempt to shoot him.

The police said a hunt had been launched to apprehend the other accused, Laadi. Raman was being produced before a court to obtain his police remand for further questioning.