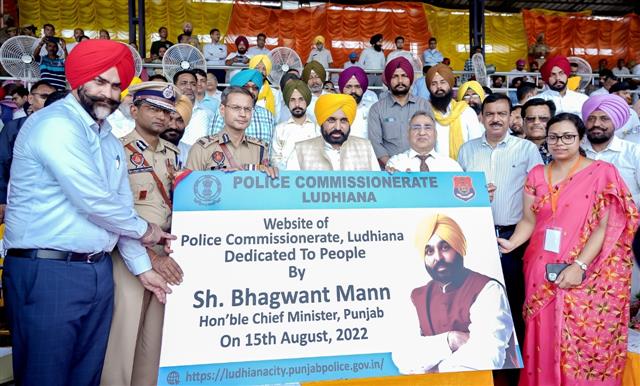 In a step towards turning tech-savvy, the Ludhiana Police Commissionerate has launched a new website with citizen interface and real-time updates on various public-related issues, besides provision for several services, which earlier required a visit to the police station.

The new website (https://ludhianacity.punjabpolice.gov.in) was launched by Chief Minister Bhagwant Mann during the state-level Independence Day celebrations, which he presided over, here on Monday.

Commissioner of Police (CP) Kaustubh Sharma told The Tribune here on Wednesday that the initiative was aimed at further simplifying the public delivery services and in the process, facilitating the public with real-time updates on a host of issues concerning the people at large.

He said residents could download the copy of FIR, lodge a complaint, check details of any vehicle stolen or found abandoned, status of missing persons and proclaimed offenders at the click of a mouse by visiting the user-friendly website.

Divulging features of the online interface portal, Joint Commissioner of Police (JCP), Saumya Mishra, said if a person was buying a second-hand phone, chances were it may have been stolen, snatched or lost. But now, it could be verified by putting the IMEI number of the phone handset on the new website.

“Sometimes a known person seems to be missing but may have been arrested at some police station. It can also be verified from the website,” she said.

Users can ascertain if a particular person was a proclaimed offender or not, if yes, at which police station, and in which case.

A true bi-linguistic site not dependent on auto-translation services such as Google or others, provides hierarchies of the Police Comissionerate in two parts — one direct field officers up to the police station level and other specialised units.

Besides providing historic data such as details of district chiefs having served so far, jurisdictional police station maps based on Google maps have also been provided with the dynamic data of SHOs and other jurisdictional officers, making it easier for citizens to browse any location and know the officers concerned.

As a homage to martyrs of the police districts, a gallery has been provided with pictures and dates of martyrdom.

Further, it provides a list of PIOs, APIOs and appellate authorities for the RTI Act, 2005, in the Police Commissionerate.

“The residents can check the status of their police verification for passport issuance,” she said.

Besides uploading the daily crime report, a detailed segment about the traffic police has been provided, covering the operational and educational aspects.

It also provides details about crime against women unit with hierarchy and procedures for a citizen to understand the working of the department.

“Since Ludhiana has been covered with the CCTV cameras system under the safe city project, details about the same have also been given on the website,” the JCP said.

The flagship project, Saanjh, which was a unique public partnership acclaimed project of the Punjab Police, has been given place on the portal as well. The concept of the project and its evolution has been explained in detail.

Contact details of SHOs, senior officers and other emergency services have also been provided and being updated dynamically.

The website further provides links to useful websites, lists of frequently asked questions, and details about good works done by the police, besides contributing a corner for media coverage and sharing information.

“The initiative is aimed at strengthening the police-public relationship and providing various services or facilities to the public without even visiting the police station. Our endeavour is to serve the public in the best possible manner,” said Dr Kaustubh Sharma, Commissioner of Police.