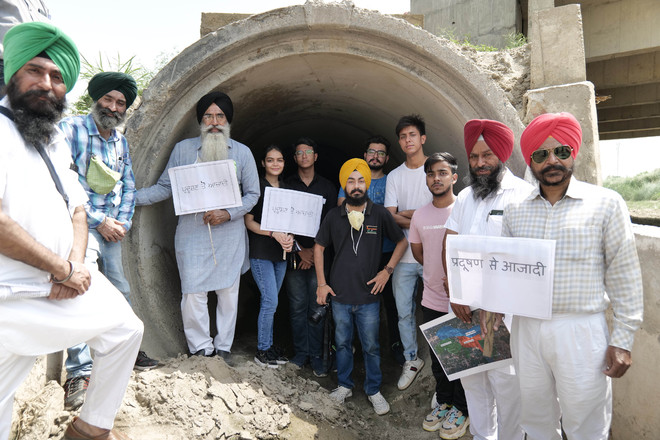 Members of the Public Action Committee for Sutlej and Mattewara Forest protest in Ludhiana.

Residents came together to protest for a better environment, free from pollution on the Buddha Nullah bridge, near Dhanansu village, here, today. The protest was organised by the Public Action Committee for Sutlej and Mattewara Forest.

The protesters have demanded that the government should consider change of the location of the modern industrial park proposed to be set up near the Sutlej and Mattewara. They also shared concern about the cycle valley.

One of the organisers, Col CM Lakhanpal (retd) said: “The Sutlej was supplying drinking water to the state and Rajasthan. It is not only providing the same for drinking but for agricultural and other purposes also. We cannot allow to make such an important river polluted like Buddha Nullah. The polluted water is causing health issues in the Malwa region of south Punjab and more degradation will lead to even more issues which the state cannot afford. The southern side of the high-tech cycle valley touches the nullah. Outlet of the sewer system of the cycle valley along the road is into the Buddha Darya. It can have serious repercussions and impact on the ongoing 650-crore rejuvenation project of Buddha Darya if not handled carefully right from this stage.”