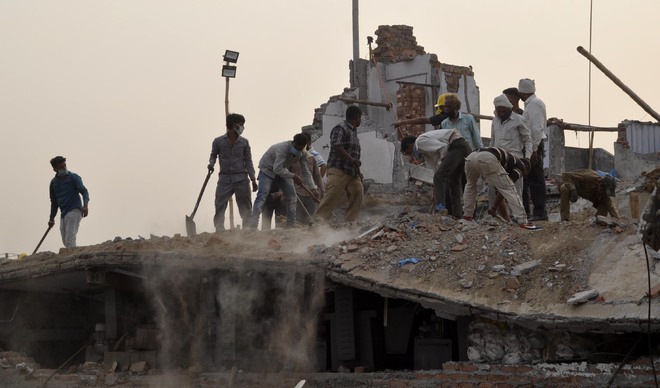 Two days after an auto parts factory roof collapse incident at Baba Mukand Singh Nagar on Daba Road here, one more person succumbed to injuries on Wednesday. Now, a total of five persons have lost their lives in the mishap that took place on Monday.

The district administration confirmed the fifth death today and the deceased has been identified as Santosh Kumar, who hailed from Bihar. He had come to Ludhiana in search of a job.

Santosh, 31-year-old, was working as a foreman in an adjoining GK Plating factory. When the roof of the auto parts factory — Jasmail Singh and Sons — collapsed on Monday morning, its debris also fell on the GK Plating factory leaving five injured. Out of these five injured, Sagar (27) had died on Monday and Santosh succumbed to his injuries today.

Unaware of the ongoing construction work in the neighbouring unit, Santosh along with others was doing his job at GK Plating that morning. Suddenly, debris fell on them.

Santosh had received a serious head injury. He was taken to a government hospital in Ludhiana, but later referred to SPS Hospital as his condition was stated to be critical.

Tejinder Singh, an owner of the GK Plating unit, said Santosh had been working with them for more than one year. “Santosh had undergone head surgery at SPS Hospital and had been unconscious for the past two days. He succumbed to injuries today. His family lives in Bihar and has been informed about the tragedy. They are coming here to claim the body. Besides, the health of three other injured workers of our factory is improving,” he added.