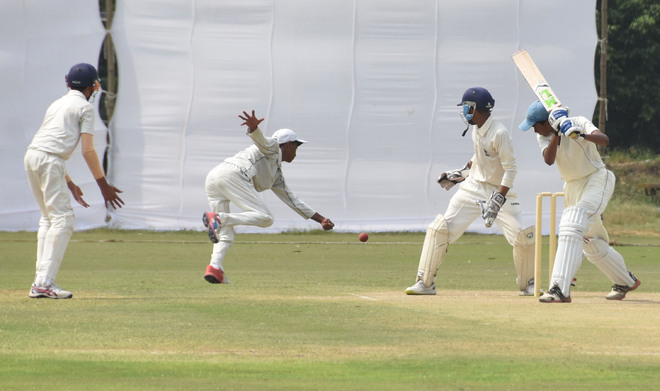 A batsman plays a shot during a match in Ludhiana on Friday. Photo: Ashwani Dhiman

Varundeep and Jaskirat Singh shared nine wickets between them to help Amritsar take a firm grip over hosts Ludhiana on the opening day of the four-day semi-final in the ongoing Punjab State Inter-District U-16 Cricket Tournament being played at the GRD Global Education Institute ground on Hambran Road on Friday.

After containing Ludhiana’s first innings to a modest total of 139 runs, the visitors were well placed (64 for 2) after 35 overs.

Ludhiana, batting first, failed to capitalise upon the fine batting display by skipper Shabd Tangri and were bowled out for a small score of 139 runs in 73.3 overs. Shabd stayed at the wicket for over two hours, faced 125 balls for his disciplined innings of 55 runs that was studded with five hits over the fence.

For Amritsar, Varundeep bowled 29.3 overs, gave away 35 runs and took five wickets. Jaskirat Singh performed equally well with the ball, grabbing four wickets for 48 runs while Sehbaj Gill got one for 17.

Amritsar started its reply on a shaky note, losing two early wickets but Rishabh Gupta and Varinder steadied the innings. Rishabh was batting on 28 and Varinder was there with 29 runs against his name as the visitors were cruising well (64 for 2 in 35 overs).